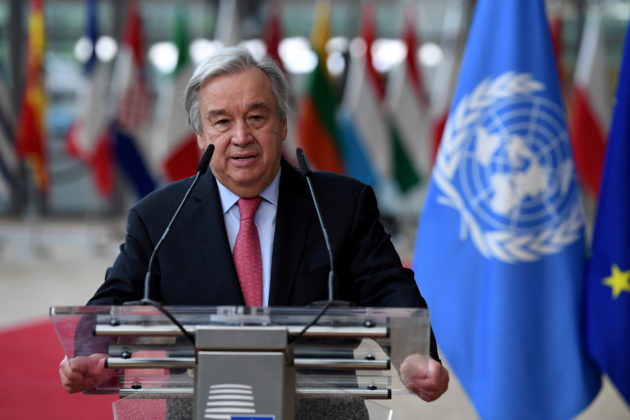 FILE PHOTO: Secretary-General of the United Nations Antonio Guterres addresses the media as he arrives on the first day of the European Union summit at The European Council Building in Brussels, Belgium June 24, 2021. John Thys/Pool via REUTERS/File Photo

BAMAKO (Reuters) – United Nations Secretary-General Antonio Guterres has asked the Security Council to authorize additional troops for the peacekeeping mission in Mali in response to rising violence by Islamist militants, according to a report seen by Reuters.

The proposed increase of 2,069 soldiers and police officers would take the authorized size of the mission, known as MINUSMA, to 17,278 uniformed personnel, the largest since it was established in 2013.

Guterres made the proposal in a report to Security Council members that is dated July 15 but has not yet been released publicly.

He said additional personnel were needed to respond to Islamist militants, many tied to al Qaeda and Islamic State, who have expanded their operations from their strongholds in the desert north into Mali’s center and neighboring countries.

“Scaling up MINUSMA’s uniformed personnel capacity would enhance the ability of the Mission to protect civilians in central Mali and create further space for the peace process in the North,” Guterres said.

The additional 2,069 personnel would include 1,730 soldiers and 339 police officers. Three quick reaction force companies, comprising 750 personnel in total, and two helicopter units with 260 members would be created.

In central Mali, the epicenter of the conflict in recent years, additional troops would be used to create forward operating bases “to expand the reach and mobility of the Mission”, the report said.

Guterres said the plan could only work in concert with stepped-up efforts by Malian authorities to bolster security and enhance governance.

But the proposal comes as Malian forces increasingly pull back from the hotspots in the countryside where they have suffered steep losses, effectively ceding control to the militants.

Meanwhile, Mali is mired in political uncertainty after military officers in May conducted their second coup in nine months.