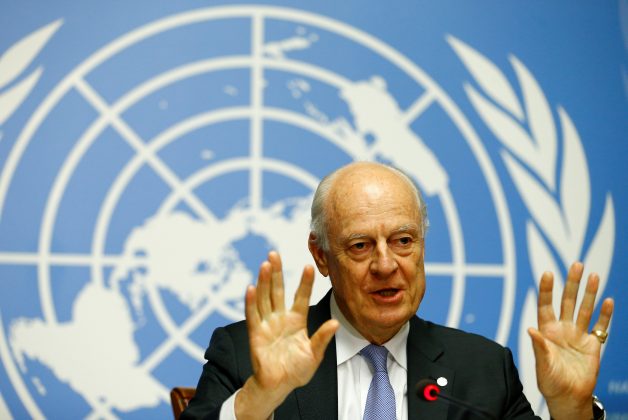 GENEVA (Reuters) – Syria’s government and opposition negotiators could soon hold face-to-face talks for the first time, U.N. mediator Staffan de Mistura said on Thursday, the penultimate day of a round of peace talks in Geneva.

He did not expect the opposition High Negotiations Committee (HNC) to unite with two other dissident groupings, the “Moscow” and “Cairo” platforms, in time for direct talks with Syria’s government during this round.

But asked if it could happen before the next round of Geneva negotiations, slated for late August, de Mistura told reporters: “Perhaps even earlier.”

“I’m not pushing for it. Because I want, when it happens, that there should not be a row but should be real talks. We are actually pushing for areas where they do have common points.”

The Moscow and Cairo platforms each comprise a handful of activists and are named after the cities where they first convened, at meetings held with Russia’s approval and support. They do not control territory on the ground or have strong links with armed groups engaged in the war.

De Mistura was speaking before a meeting with Syrian government negotiator Bashar al-Ja’afari, promising to “go into much more substance on the political side”.

The glacial pace of the Geneva talks, which some observers see as simply a way of keeping an avenue for peace talks open in case of an unexpected breakthrough, owes much to the fact that de Mistura has to meet each delegation separately.

Some diplomats suspect the Moscow and Cairo platforms, which are much less opposed to President Bashar al-Assad than the HNC is, are little more than a mechanism created by Assad’s ally Russia to prevent direct negotiations and force the HNC to dilute its stance.

“It’s always been a trap for the opposition laid by the Russians, through their continual needling of the HNC about there being more than one opposition, which is mostly nonsense with the relative weight of these groups,” a Western diplomat said.

“If the HNC succeed in defusing this trap, and coming together with the Moscow and Cairo groups in some way, then it puts Ja’afari under quite a lot of pressure.”

Another Western diplomat said it was a “Russian narrative” that the various groups needed to unite.

“To us, the broader the opposition the better, but at the same time the most important thing is to have an opposition that is cohesive, can act as one party in the political process.”

The three opposition groupings have recently held technical talks, aligning their positions to the extent that they might be able to field a single delegation, if not a united one.