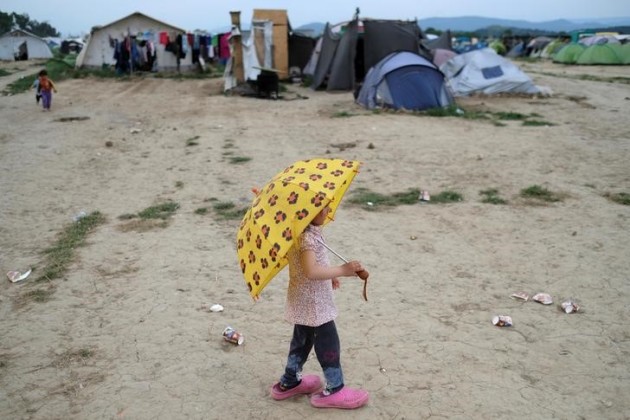 A girl holds an umbrella at a makeshift camp for migrants and refugees at the Greek-Macedonian border near the village of Idomeni, Greece, May 10, 2016. REUTERS/Marko Djurica

ATHENS (Reuters) – A top United Nations official urged Greece on Monday to stop detaining refugee and migrant children, some of whom are locked up in police cells for weeks, and to develop child protection services instead.

The U.N. Special Rapporteur on the human rights of migrants, Francois Crepeau, said he had met unaccompanied children held in police stations for more than two weeks without access to the outdoors, and “traumatised and distressed” by the experience.

Others were with their families in overcrowded detention centres, where inter-communal frictions and contradictory information created “an unacceptable level of confusion, frustration, violence and fear”, he said.

“Children should not be detained – period,” said Crepeau, on a fact-finding mission in Greece from May 12 to 16.

“Detention should only be ordered when people present a risk, a danger, a threat to the public and it has to be a documented threat, it cannot simply be a hunch.”

Crepeau said children and families should be offered alternatives to detention. He urged authorities to develop a “substantial and effective” guardianship system for unaccompanied minors and increase the shelter capacity for them.

More than a million migrants, many fleeing the Syrian war, have arrived in Europe through Greece since last year. More than 150,000 have arrived in 2016 so far, 38 percent of them children, according to U.N. refugee agency data.

Greece, in its sixth year of economic crisis, has struggled to cope with the numbers.

International charity Save the Children says an estimated 2,000 unaccompanied children who travelled alone to Europe or lost their families on the way are stranded in Greece and only 477 shelter spaces are available across the country.

(Unaccompanied minors) are put in … protective custody and the only place there is space (for them) is the cell in police stations and that’s where we find them quite often,” Crepeau said.

“Spending 16 days (in a police cell) is way too long. What is needed is specialised body of competent professionals who can take care of unaccompanied minors.”