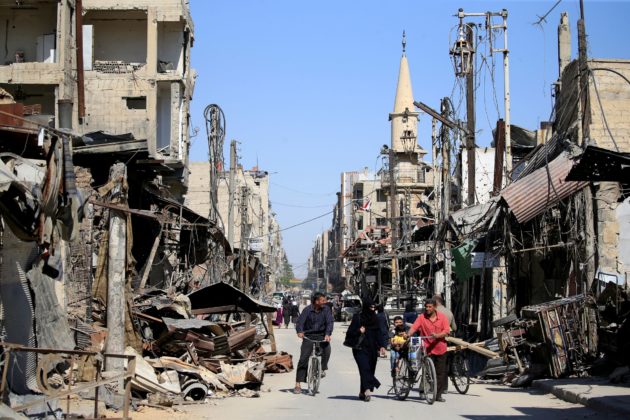 AMSTERDAM (Reuters) – The United States on Thursday accused Russia of helping Syria conceal the use of banned toxic munitions in the civil war by undermining the work of the global chemical weapons agency trying to identify those responsible.

The comments by the U.S. representative to the Organisation for the Prohibition of Chemical Weapons (OPCW), Kenneth Ward, drew a rapid denial from Moscow and came as Western powers and Russia clashed at the agency’s annual conference in The Hague.

Moscow has for months cited dissent by two former OPCW employees who leaked a document and an email as evidence that the OPCW doctored the conclusions of a March 1 report which found that a toxic chemical containing chlorine was used in a 2018 attack near Damascus.

More than 40 people were killed in that attack in Douma, a town on the outskirts of the capital then held by rebels, on April 7, 2018.

The United States, Britain and France retaliated a week later by firing missiles at Syrian government targets, the biggest Western military action against the Damascus authorities of the eight-year-old war.

Syria and Russia deny there ever was a chemical attack in Douma, saying the event was staged using bodies brought from elsewhere, and that the OPCW’s report on Douma was doctored to justify Western military intervention.

The OPCW has become the battleground for a diplomatic clash on Syria after Russia in 2017 vetoed a resolution to extend the mandate of the U.N.-OPCW Joint Investigative Mechanism (JIM), which concluded in a series of reports that the Syrian military used both nerve agent sarin and chlorine as weapons.

The OPCW’s own Investigation and Identification Team (IIT), which was established by a clear majority vote by its member states in June 2018, is looking into who was responsible for the Douma attack, among several other incidents.

Its first report is expected next year.

Russian Ambassador to the OPCW, Alexander Shulgin, repeated objections to the creation of the IIT, saying it was illegal and politicized. Syria’s representative to the OPCW on Thursday vowed not to cooperate with the IIT’s investigations.

Ward said Russia and Syria were merely seeking to cover up the use of chemical weapons by undermining the OPCW.

“Unfortunately the Russian Federation has played a central role in this cover-up,” Ward told delegates. “Russia and Syria may sit with us here, but they stand apart from us in a fundamental way. They continue to embrace chemical weapons.”

Shulgin rejected the U.S. claim that Russia was helping Syria cover up chemical crimes carried out by the Syrian regime.

“It is exquisite rhetoric… But these assertions do not hold water. We disagree,” Shulgin said.