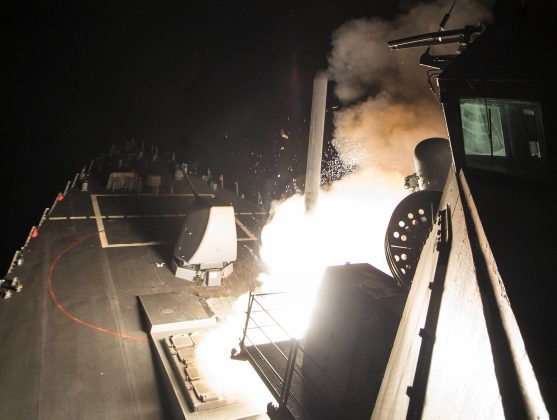 (Reuters) – U.S. allies expressed support on Friday for Washington’s missile strikes on Syria, calling them a proportionate response to Syria’s suspected use of chemical weapons.

The strikes were denounced as illegal by Syria and its allies Russia and Iran. Iraq criticized “hasty interventions” in an apparent comment on the U.S. action.

But a wide range of U.S. allies from Asia, Europe and the Middle East expressed support, if sometimes cautiously, in similar terms.

“The U.K. government fully supports the U.S. action, which we believe was an appropriate response to the barbaric chemical weapons attack launched by the Syrian regime and is intended to deter further attacks,” a British government spokesman said.

“Japan supports the U.S. government’s determination to prevent the spread and use of chemical weapons,” he said.

Turkey viewed the strikes positively and the international community should sustain its stance against the “barbarity” of the Syrian government, Deputy Prime Minister Numan Kurtulmus said.

In an interview with Turkish broadcaster Fox TV, Kurtulmus said Assad’s government must be punished in the international arena and the peace process in Syria needed to be accelerated.

French Foreign Minister Jean-Marc Ayrault said Russia and Iran needed to understand that supporting Assad made no sense and that the escalation of the U.S. military role in Syria was a “warning” to “a criminal regime”.

“Use of chemical weapons is appalling and should be punished because it is a war crime,” Ayrault told Reuters and France Info radio.

The Dutch government said: “The United States has given a clear signal that the use of poison gas crosses a line.” It also labeled the strikes a “proportionate” response.

“U.S. strikes show needed resolve against barbaric chemical attacks. EU will work with the US to end brutality in Syria,” the chairman of the council of EU leaders, Donald Tusk, said on Twitter.

Australian Prime Minister Malcolm Turnbull said the strikes sent “a vitally important message” that the world would not tolerate the use of chemical weapons.

“The retribution has been proportionate and it has been swift,” he told reporters in Sydney. “We support the United States in that swift action.”

Saudi Arabia and Qatar, which back rebels fighting Assad, said they supported the U.S. strikes and held only the Syrian government responsible for the attacks.

Other Gulf countries, including the United Arab Emirates, Bahrain and Kuwait, also expressed support for the attacks.

Some countries expressed reservations about the U.S. decision to launch strikes without authorization from the U.N. Security Council.

Indonesia, home to the world’s largest Muslim population, condemned the use of chemical weapons in Syria. “At the same time, Indonesia is concerned with unilateral actions by any parties, including the use of Tomahawk missiles, in responding to the chemical weapon attack tragedy in Syria,” Foreign Ministry spokesman Armanatha Nasir said in a text message.

“Military actions, undertaken without prior authorization of the U.N. Security Council, are not in line with international legal principles in the peaceful settlement of disputes, as stipulated in the U.N. Charter.”

One thought on “U.S. allies show support for strikes on Syria”