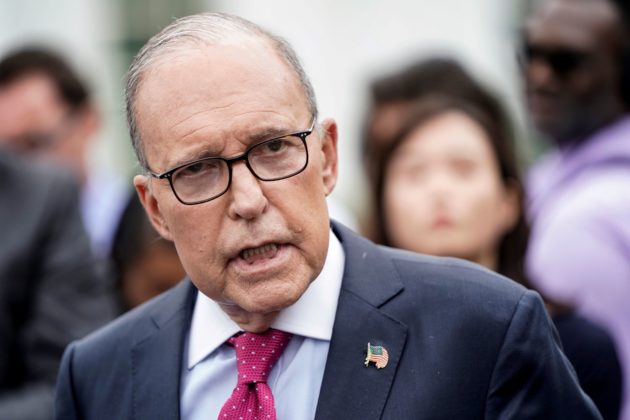 WASHINGTON (Reuters) – The United States and China are getting close to a trade agreement, White House economic adviser Larry Kudlow said on Thursday, citing what he called very constructive talks with Beijing about ending a 16-month trade war.

Kudlow said negotiators for the world’s two largest economies were in close touch via telephone but he gave no further details on the timing of a possible deal.

“We’re getting close,” he told an event at the Council on Foreign Relations in Washington. “The mood music is pretty good, and that has not always been so in these things.”

The United States and China have been locked in successive waves of tit-for-tat tariffs that have roiled financial markets and threaten to drag growth in the global economy to its lowest rate since the 2007-2008 financial crisis.

Markets are anxiously awaiting an agreement to end uncertainty that has slowed business investment around the globe. An agreement had appeared likely in May, but those prospects were dashed after U.S. negotiators said China backed away from the text of a draft agreement.

Kudlow’s comments could ease market concerns that flared again this week amid reports that the trade talks had hit a snag over how and when to reduce tariffs, and what level of agricultural purchases could be expected from China.

Markets also soured after U.S. President Donald Trump on Tuesday said he could impose substantial new tariffs on China if no deal was reached.

Kudlow told the audience he had just come from a meeting of the top Trump administration trade officials and was more optimistic.

“It’s not done yet, but there has been very good progress and the talks have been very constructive,” he told the event.

He also opened the door to the possibility that Trump and Chinese President Xi Jinping would not need to meet in person to clinch a deal.

Trump had hoped to sign the “phase one” agreement with China on the sidelines of the Asian-Pacific Economic Cooperation summit in Chile this month, but that possibility disappeared after Chile withdrew from hosting the event.

Kudlow said the White House had hoped to stick to that general timetable. He joked that his preference was for the deal to be signed in his office on the second floor of the White House.