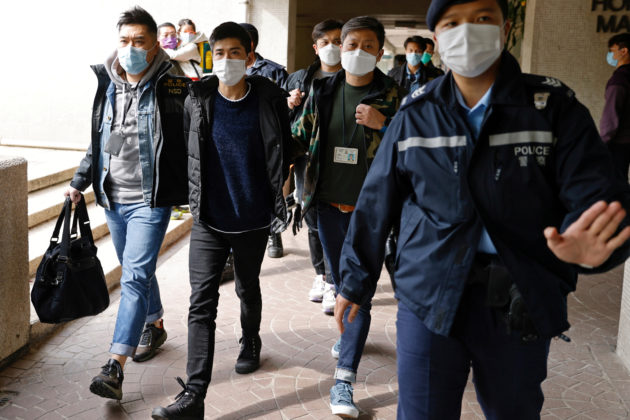 By Humeyra Pamuk and David Brunnstrom

WASHINGTON (Reuters) – The United States announced sanctions on Friday against six Hong Kong or Chinese officials it blamed for implementing a new security law in Hong Kong, following the mass arrests of pro-democracy activists this month.

Hong Kong police arrested 53 people on Jan. 5 in dawn raids on democracy activists in the biggest crackdown since China last year imposed a security law which opponents say is aimed at quashing dissent in the former British colony.

The six people targeted for new sanctions include Frederic Choi, director of the national security division of the Hong Kong police, and Sun Qingye, a deputy to Zheng Yanxiong, who was appointed in July to head a new national security office in Hong Kong. Also named were pro-Beijing legislator Tam Yiu-chung and You Quan of China’s United Front Work Department.

U.S. Secretary of State Pompeo warned last week of fresh sanctions in response to the arrests of pro-democracy activists. That warning came a day after supporters of President Donald Trump stormed Congress in a bid to overturn his November election defeat, prompting China’s state media to accuse U.S. politicians of “double standards.”

It was the latest in a series of last minute steps taken by Pompeo on foreign policy, several targeting China in what analysts see as a bid driven by Pompeo to lock in a tough approach to Beijing.

Trump has pursued hardline policies toward China on issues ranging from trade to espionage and the coronavirus.

His administration has already imposed sanctions on Chinese officials for their actions involving the pro-democracy movement and other alleged rights abuses, and last July declared an end to the territory’s privileged economic status under U.S. law.

The Trump administration took another swipe at China and its biggest companies on Thursday, imposing sanctions on officials and companies for alleged misdeeds in the South China Sea and imposing an investment ban on nine more firms.

Last Saturday, Pompeo said he was lifting restrictions on contacts between U.S. officials and counterparts in Taiwan, a move that greatly angered Beijing, which considers the island a renegade province.