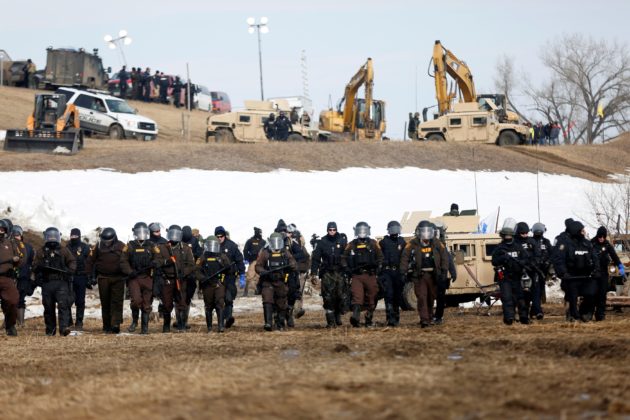 NEW YORK (Reuters) -The U.S. Army Corps of Engineers on Friday said it will allow Energy Transfer’s Dakota Access oil pipeline to keep running during an environmental review, a blow to activists who wanted the line shut after a key environmental permit was scrapped last year.

The Dakota Access Pipeline (DAPL) has been the flashpoint for a years-long legal battle between its operator, Energy Transfer LP, and several Native tribes that want it shut after opposing its construction. It is the most important artery for crude transport out of North Dakota, shipping up to 570,000 barrels of North Dakota’s crude production daily.

Energy Transfer shares were up 2.5% in afternoon trading.

Last year, native tribes led by the Standing Rock Sioux won a victory when Judge James Boasberg of the U.S. District Court of the District of Columbia vacated a permit allowing the line to run under Lake Oahe, a key water source.

The Corps could have shut the line pending another review, but deferred to the judge. Boasberg gave operators of the pipeline until April 19 to make the case for keeping the line flowing before he issues a ruling.

The tribes opposing DAPL sought to shut the line, and frustrated tribal representatives decried what they called one in a series of decisions that abrogates the rights of Native Americans.

“It’s the continuation of a terrible history that we believed was going to change,” Earthjustice lawyer Jan Hasselman, who represents the Standing Rock Sioux, told the court. “So we are really disappointed to hear this news from the Army Corps.”

Energy companies said a shutdown would increase reliance on crowded rail lines and smaller pipelines and hamper transport of crude from the Bakken region, where more than 1 million barrels are produced daily.

The Army Corps is expected to produce an environmental impact statement (EIS) by March of 2022, said Corps attorney Ben Schifman.

“The Corps is proceeding with the EIS process … but at this time has not taken any additional action,” he said.

The Standing Rock Sioux and environmental groups have ramped up pressure on the White House to shut the line. President Joe Biden’s administration is trying to reduce U.S. carbon emissions and protect minority groups from pollution threats. It canceled a presidential permit for the unbuilt Keystone XL pipeline from Canada but has not shut an operating pipeline.

In 2016, tens of thousands of protesters flocked to the site to support tribes who said they had not been adequately consulted about the line’s construction.