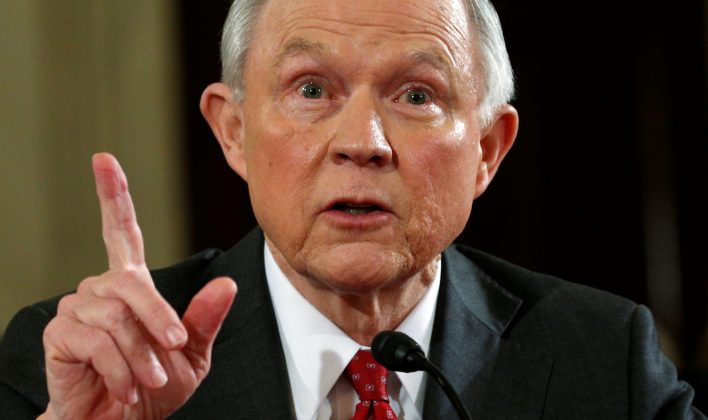 A bitterly divided Senate confirmed Republican Senator Jeff Sessions as the next attorney general of the United States. REUTERS/Kevin Lamarque

In his speech to the National Association of Attorneys General in Washington, Sessions said the Justice Department should instead use its resources to help police figure out the best way to fight crime.

He announced the formation of a Justice Department task force to look at deficiencies in current practices to combat crime and propose new legislation.

The Justice Department is still weighing whether it should impose reforms on the Chicago Police Department, which was the subject of a critical report by the Obama administration.

Sessions said violent crime had risen since 2014, although it is down almost half since the early 1990s.

Federal Bureau of Investigation crime statistics for 2015, the latest year for which complete data is available, showed violent crimes increased 3.9 percent from 2014, while property crimes declined by 2.6 percent. The rise in violent crime came after two years of decreases, not decades of declines as Sessions suggested.

The Obama administration began several investigations into police departments that it said were unfairly targeting minorities and using excessive force. Videos of such incidents shared online have sparked protests in cities from Baltimore to Ferguson, Missouri.

The address to the attorneys general, who are responsible for prosecuting state-level crimes, signaled that the Trump administration would commit itself to supporting police rather than questioning their practices.

“To confront the challenge of rising crime, we must rely heavily on local law enforcement to lead the way,” Sessions said in prepared remarks. “And they must know they have our steadfast support.”