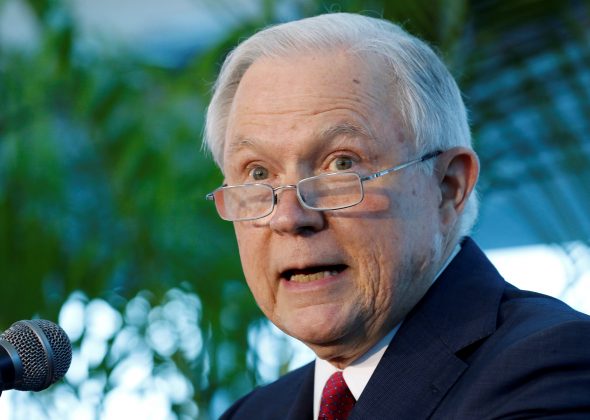 FILE PHOTO: U.S. Attorney General Jeff Sessions speaks on the growing trend of violent crime in sanctuary cities during an event on the Port of Miami in Miami, Florida, U.S. on, August 16, 2017. REUTERS/Joe Skipper/File Photo

BOSTON (Reuters) – Protesters gathered outside a federal court in Boston on Thursday where U.S. Attorney General Jeff Sessions came to address law enforcement about what he called the need to tackle transnational gang violence and to secure the Mexican border.

Sessions reemphasized what he said was a need to target cross-border criminal organizations, specifically the gang MS-13, which the Justice Department says has more than 30,000 members worldwide and 10,000 members in the United States.

Tying the effort to fight the gang and Republican President Donald Trump’s administration’s efforts to crackdown on illegal immigration, Sessions said the Justice Department was directing more prosecutorial resources to the U.S.-Mexican border.

He also made an apparent reference to Trump’s campaign promise to build a wall along the U.S. border with Mexico, saying such a wall would help protect against gang members who are smuggled across it.

“Securing our border, both through a physical wall and with brave men and women of the border patrol restoring an orderly and lawful system of immigration, is part and parcel of any successful crime fighting, gang fighting strategy,” he said.

He also said the Trump administration was examining the “exploitation” of a program that helps unaccompanied refugee minors by gang members using it to “come to this country as wolves in sheep clothing” and to recruit new members.

Outside the courthouse, around 40 people gathered in a protest organized by the local chapter of the American Civil Liberties Union, holding signs saying “Jeff: Go Home” and “Racism is #Notwelcome.”

MS-13, also called La Mara Salvatrucha, has taken root in the United States in Los Angeles in the 1980s in neighborhoods populated with immigrants from El Salvador who had fled its civil war.

In Boston, federal prosecutors have since January 2016 brought racketeering, drug trafficking, weapons and other charges against 61 people linked to MS-13 in Massachusetts including leaders, members and associates of the gang.

(Reporting by Nate Raymond in Boston; editing by Diane Craft)