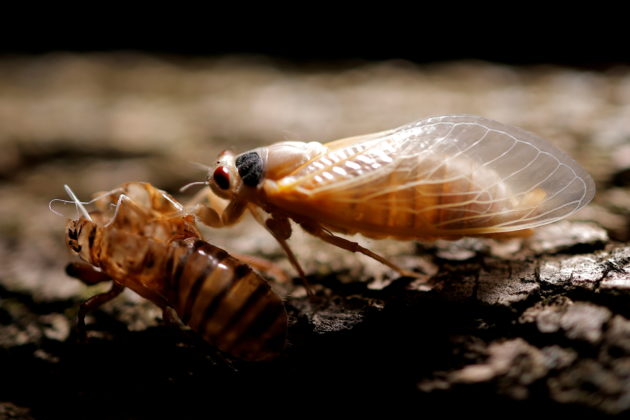 FILE PHOTO: A newly emerged adult cicada dries its wings on a tree near Rock Creak park in Washington, D.C., May 9, 2021.The once-every-17 year Brood X cicada hatches will occur in the middle part of the Eastern United States, from as far south as Eastern Tennessee, all the way up to southern parts of New York. REUTERS/Carlos Barria/File Photo

(Reuters) – Remember what was happening 17 years ago? The Motorola flip phone was high-tech, Facebook was brand new, George W. Bush was president, and, in some parts of the United States, people could hear a symphony of the cicadas.

Much has changed since then. But once again, billions of the red-eyed cicadas are beginning to crawl their way above ground again in portions of the eastern United States.

The cicadas, known as Brood X or Brood 10, have begun emerging from the earth in dramatic fashion in Washington D.C. and 15 states, from Georgia to New York, and west to Indiana and Illinois.

“This is just a spectacular event. I mean, there’s nothing else like this on the entire planet Earth, even in the entire universe,” said Dr. Michael Raupp, a cicada enthusiast and Professor Emeritus of Entomology at the University of Maryland.

“This is the only place anywhere that we have 13 and 17-year cicadas emerging by the billions, if not trillions,” Raupp said.

The 1-1/2 inch-long (3.8 centimeter) black insects with iridescent wings and bright red eyes live above ground as adults for about three weeks – just long enough to reproduce before dying.

Raupp said they are found in larger numbers in areas where there are more mature trees, and where the insects were plentiful in previous cicada cycles.

They tend to thrive in sunlit forest edges, which often provide the warmer weather and younger trees most ideal for them to lay their young.

Periodical cicadas burrow into the ground after hatching, some digging as far as 8 feet (2.4 meters) below ground. While underground, the nymphs suck the sap from tree roots for nourishment and after 17 years, they emerge and climb trees and shrubs, where they shed their crunchy skins and harden into maturity. The males make a cacophony of sounds in the tree tops as they look to mate.

Once the cicadas mate, the females cut slits into tree branches, where they deposit 400 to 600 eggs. The adults quickly die, but the eggs hatch a few weeks later to restart the cycle. This year’s cicada class will bore into the ground and won’t emerge again until 2038.

Raupp said cicadas are not harmful to pets or humans, and is encouraging people to go on a cicada safari right in their own backyards.