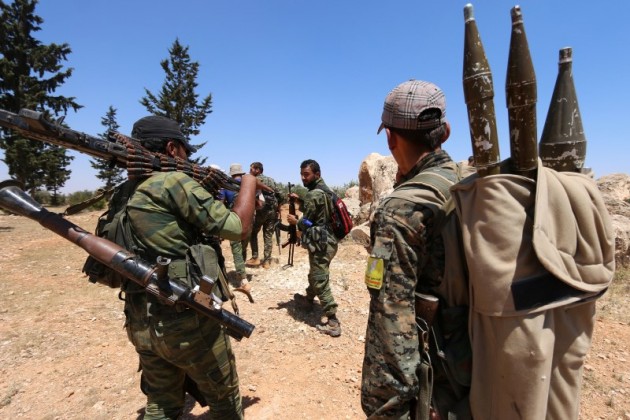 Fighters of the Syria Democratic Forces (SDF) carry their weapons as they walk in the western rural area of Manbij, in Aleppo Governorate, Syria, June 13, 2016. REUTERS/Rodi Said

By Rodi Said and Lisa Barrington

NEAR MANBIJ, Syria/BEIRUT (Reuters) – – U.S.-backed forces waging an offensive against the Islamic State-held city of Manbij in northern Syria appealed for international assistance for those fleeing the fighting on Tuesday as the forces tightened their encirclement of the city.

The SDF push comes at the same time as other enemies of Islamic State, including the governments of Syria and Iraq, also launched major offensives on other fronts, in what amounts to the most sustained pressure on the militants since they proclaimed their caliphate in 2014.

The Syria Democratic Forces (SDF) alliance launched the advance two weeks ago to seize Islamic State’s last territory on the Syria-Turkey border and cut the self-declared caliphate off from the world.

“In the areas we control we have tried to take care of the needs of the internally displaced persons. But we are not able to cover their needs,” Sharfan Darwish of the SDF-allied Manbij Military Council told Reuters in Beirut by telephone.

“The international community must turn their attention to the people which have been liberated from Daesh (Islamic State),” he said, adding that there were no international humanitarian organizations working in the area.

Darwish said the Manbij civil council was bringing supplies from the northern, Syrian YPG militia-controlled city of Kobani to displaced persons, but this was not enough.

The SDF is a U.S.-backed group formed last year which includes the powerful Kurdish YPG militia and Arab fighters.

They are one of a number of sides fighting in Syria’s complex civil war now in its sixth year. The conflict pits rebels against Syrian President Bashar al-Assad.

Having seized control of the last route into Manbij on Friday, the SDF has yet to enter the town.

“We are closing in on Manbij,” Darwish said, adding that fighting continues on the city’s outskirts.

The Observatory said the SDF has taken about 105 villages and farms around Manbij since the start of the operation.

Since the start of the offensive on May 31, 49 civilians have died as a result of the U.S.-led coalition air strikes in and around Manbij and 19 civilians had been killed by Islamic State, the Observatory said.

It also said at least 246 Islamic State fighters and 29 SDF fighters have been killed.

Syrian government and allied forces are trying to advance against the Islamic State south-west of their de facto capital in Syria, Raqqa. Fighting on Monday between Ithriya and al Tabqa killed 11 government and 17 Islamic State, the Observatory said.

Syrian state media broadcast pictures of bloodied bodies lying in the desert sand which it said showed 16 Islamic State fighters killed by government and allied forces in the fighting.

Syrian government and allied forces have been supported by Russian air power since September last year, an intervention which helped turn the tide of the war in Assad’s favor.

(Reporting by Lisa Barrington in Beirut and Rodi Said near Manbij, Syria, editing by Peter Millership)