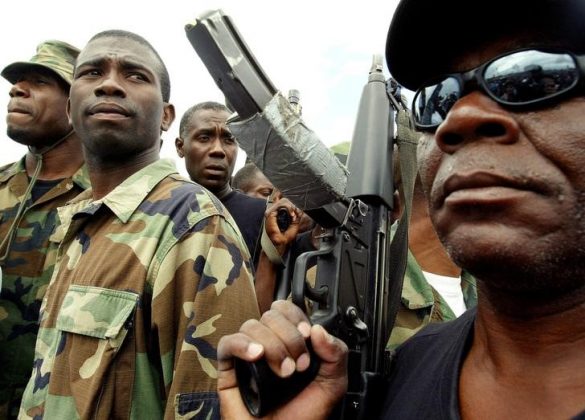 PORT-AU-PRINCE (Reuters) – Haitian police have evacuated some 50 U.S. citizens to safety after attempted attacks by supporters of Haitian Senator-elect Guy Philippe, who was arrested and extradited to the United States last week, a police official said on Monday.

Philippe, long wanted by the U.S. Drug Enforcement Administration and remembered for his role in a 2004 coup against former President Jean-Bertrand Aristide, was elected senator for the southwestern Grand’Anse region in polls on Nov. 20.

But on Thursday, days before he was supposed to be sworn in, police arrested him outside of a radio station and flew him to the United States, where a Miami court charged him with money laundering and drug trafficking. Philippe denies the charges.

The extradition has stirred tensions in Grand’Anse, an area that is rebuilding after damages inflicted by Hurricane Matthew last October and where Philippe enjoys popularity.

Philippe supporters are also believed to have attacked two U.S. citizens who ran an orphanage and stole their passports and other belongings from their home, police officials said.

Police have evacuated more than 50 U.S. citizens to safer places in Haiti since Friday, Soljour said, who advised those who chose to stay not to leave their residences. Higher than usual numbers of U.S. citizens are in the region helping with hurricane recovery.

U.S. citizens were evacuated to a police station before moving to a United Nations base, where they waited for preparations to fly them to Port-au-Prince, Soljour said. Some have been flown to the capital, while others are still waiting.

“There are groups linked to Guy Philippe that were actively seeking to attack or capture U.S. citizens following (his) arrest and extradition,” Soljour said.

A spokesman for the U.S. embassy, Karl Adam, said the embassy was aware of the threats and has sent messages to citizens to advise them to avoid certain areas and to be particularly careful.

“I know some have decided to leave and this is not something the embassy is organizing”, Adam said.

More protests were scheduled to take place over the next several days in Grand’Anse and in Port-au-Prince, including outside the U.S. embassy.

Some 200 protesters massed at a barricade across the street from parliament on Monday as new senators were sworn into office, with about half denouncing Philippe’s arrest with slogans, T-shirts and waving signs.