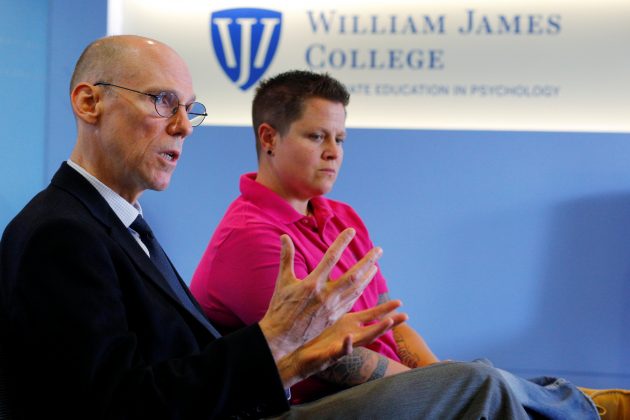 Dr. Bob Dingman, Director of the Military and Veterans Psychology Concentration, speaks to Reuters at William James College of Psychology, the first in the nation to run a program focusing specifically on training military veterans to treat the mental health problems of their fellow soldiers and veterans, in Newton, Massachusetts, U.S., May 16, 2017. REUTERS/Brian Snyder

NEWTON, Mass. (Reuters) – Former U.S. Army Specialist Tara Barney will never forget the 2013 night when a fellow soldier cried as he described holding a dying friend in his arms, a wartime memory he had not shared with anyone.

“I can’t even talk to my wife like this,” she recalled her friend saying. “Nobody would understand.”

She finished her four-year enlistment and enrolled in William James College, which says it is the only U.S. psychology graduate school focused on training veterans as counselors.

Founded in 2011, the school’s programs aim to address the high rates of post-traumatic stress disorder, depression and other mental health conditions experienced by veterans of the wars in Iraq and Afghanistan, and other conflicts.

“If you talk to most vets, they want to talk to people who have had the same sets of experiences,” said Robert Dingman, the director of military and veterans psychology at the school, located west of Boston. “We don’t believe by any means that only vets can help vets, but we think it’s a good career pathway.”

Estimates of how many of the country’s 19 million veterans experience mental health problems vary widely. A federal government report released last year found that about 40 percent of veterans who received care through the Veterans Health Administration were diagnosed with a mental health or substance abuse condition, most commonly depression, followed by post-traumatic stress disorder.

Other data suggest that figure may represent a higher rate of mental health and substance abuse than is seen among the overall population of veterans. An analysis of medical research by the RAND Corp think tank found that rates of PTSD likely range from 5 percent to 20 percent of veterans.

William James College wants to bridge the cultural divide between veterans, some of whom view seeking mental health care as akin to admitting weakness, and psychologists and counselors, many of whom know little about military culture.

The gap is wide enough that Barney’s fellow student, Adam Freed, left a graduate psychology program at Yale University when he realized he was failing to connect with patients’ issues related to their or their loved ones’ military service.

“It was just something that was completely alien to me,” said Freed, 31. “I became increasingly interested in why didn’t I get it?”

Freed decided the best way to understand was to enlist. He signed up for the New York Army National Guard and went on to serve a tour in Afghanistan before enrolling at William James. This month he returned to active duty as an Army captain and military psychologist.

The college, previously known as the Massachusetts School of Professional Psychology before renaming itself after the 19th-century philosopher, regarded as one of the founding thinkers of American psychology and brother to novelist Henry James, boasts a growing population of veterans, who this year represented about 50 of its 750 students.

Barney said her friends and even her wife were skeptical when she told them she was planning a career in psychology after stints as a prison guard and working on Army missile systems.

But the experience with her fellow soldier friend had convinced her that her military service would be invaluable as a counselor, she said, adding, “Some people just don’t want to know the veteran’s experience.”

Several students in the program said they also hope to overcome the cultural gaps that can make it harder for therapists to connect with veterans.

Fewer than one in 12 adult Americans have served in the armed forces, and the students said many veterans are wary of discussing their wartime experiences with people who do not share a military background.

Freed recalled a psychologist asking him during a job interview what it felt like to be “blown up.” Freed had avoided such an incident in combat but said he did not consider the topic as appropriate for casual conversation.

“I don’t think people ask about other forms of trauma with the same laissez-faire attitude,” Freed said. “I would confidently say that they would not ask, ‘What was it like to be raped?’ These are both things that are extremely, extremely traumatic and yet they are treated in a very different way.”