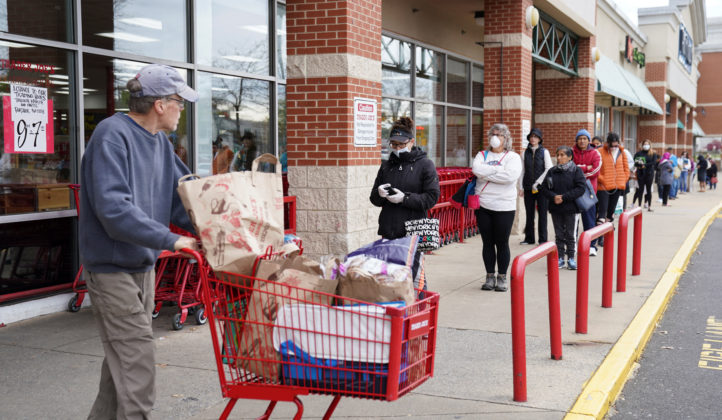 FILE PHOTO: A shopper passes near a self-distancing queue outside Trader Joe's, as they limited the amount of shoppers allowed in the store to help prevent the spread of coronavirus disease (COVID-19), in Bailey's Crossroads, Virginia, U.S., March 31, 2020. REUTERS/Kevin Lamarque

WASHINGTON (Reuters) – U.S. consumer confidence nudged up in May, suggesting the worst of the novel coronavirus-driven economic slump was probably in the past as the country starts to reopen, but it would probably take a while to dig out of the hole amid record unemployment.

The Conference Board said on Tuesday its consumer confidence index edged up to a reading of 86.6 this month from a downwardly revised 85.7 in April. Economists polled by Reuters had forecast the index rising to 87.5 in May from the previously reported reading of 86.9 in April.

Businesses across the country are opening doors after shuttering in mid-March as states and local governments took drastic measures to slow the spread of COVID-19, the respiratory illness caused by the virus, almost grounding the country to a halt. The economy contracted at its deepest pace in the first quarter since the Great Recession and lost at least 21.4 million jobs in March and April.

“While the decline in confidence appears to have stopped for the moment, the uneven path to recovery and potential second wave is likely to keep a cloud of uncertainty hanging over consumers’ heads,” said Lynn Franco, senior director of economic indicators at The Conference Board in Washington.

Stocks on Wall Street rallied, spurred by the reopening of the economy and optimism about a potential coronavirus vaccine. The dollar was trading lower against a basket of currencies. U.S. Treasury prices fell.

The Conference Board survey’s present situation measure, based on consumers’ assessment of current business and labor market conditions, fell to a reading of 71.1 this month from 73.0 in April. This measure has declined by nearly 100 points in the last couple of months, underscoring the impact of COVID-19.

But the expectations index based on consumers’ short-term outlook for income, business and labor market conditions climbed to 96.9 from a reading of 94.3 in April.

Despite the improvement in expectations, households remained worried about their finances. They also anticipated higher inflation, which could lead to a sense of diminished purchasing power and hurt much-needed consumer spending.

The Conference Board’s so-called labor market differential, derived from data on respondents’ views on whether jobs are plentiful or hard to get, improved to a reading of -10.4 in May from -15.7 in April. That measure closely correlates to the unemployment rate in the Labor Department’s employment report.

The percentage of consumers expecting an increase in income dropped to 14.0% this month from 17.2% April and the proportion anticipating a drop fell to 15.0% from 18.4%.

March’s sales pace was revised down to 619,000 units from the previously reported 627,000 units. Economists polled by Reuters had forecast new home sales, which account for about 10% of housing market sales, diving 21.9% to a pace of 480,000 units in April.