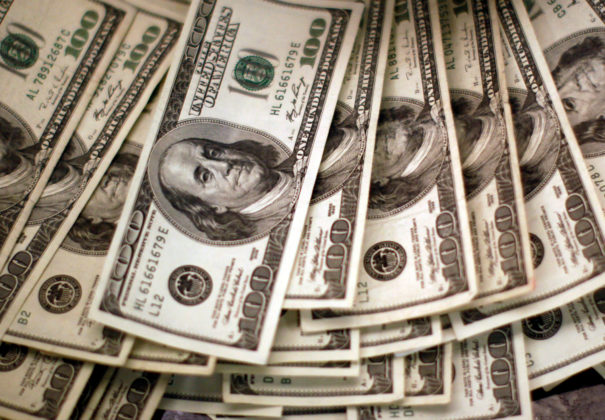 FILE PHOTO: U.S. dollars are counted out by a banker counting currency at a bank in Westminster, Colorado November 3, 2009. REUTERS/Rick Wilking/File Photo

NEW YORK (Reuters) – The U.S. dollar gained on Monday, rising for a second straight session, bolstered by safe haven bids amid surging coronavirus cases in Europe and the United States as well as a lack of progress on a U.S. stimulus package.

The United States has recorded its highest number of new COVID-19 cases for two consecutive days and so has France. Spain announced a new state of emergency and Italy has ordered restaurants and bars to shut by 6 p.m.

On the stimulus front, U.S. House Speaker Nancy Pelosi said on Sunday she expected a White House response on Monday to the latest relief plan, but there is little evidence a deal is close.

“Skittish investors are scooping up the greenback as virus cases accelerate around the world, stimulus talks in Washington remain in limbo, and trepidation is on the rise ahead of America’s presidential election,” said Joe Manimbo, senior market analyst, at Western Union Business Solutions in Washington.

Media reports that the Oxford/AstraZeneca vaccine has proved successful in elderly people and that staff at a major British hospital were told to prepare for it as early as next month were not enough to bolster sentiment.

The euro <EUR=EBS>, which has the largest percentage share of the dollar index, fell 0.3% to $1.1820. It has slipped earlier by half a percent after the German Ifo business climate index fell for the first time in six months in October.

Speculators remain short the U.S. dollar, the latest data from the Commodity Futures Trading Commission showed, though the number of shorting contracts declined in the last couple of weeks. [IMM/FX]

“What will drive the U.S. dollar this week is the ultimate trend in equities and the steepness of the U.S. Treasury two-year and 10-year curve,” said Stephen Gallo, currency analyst at BMO Capital Markets. “Firmer equities yield a steeper curve, which yields a weaker dollar.”

On Monday, however, the spread between the U.S. two-year and U.S. 10-year notes narrowed to 65 basis points, after hitting its widest gap since early June.

The U.S. dollar rose 0.5% against the Chinese yuan in the offshore market to 6.703 <CNH=EBS>, in a sign of caution as the Chinese government began discussions on its next five-year plan.

Some other losers included the Norwegian crown and the Australian dollar, as they retreated from last week’s gains driven by traders taking on more risk. Both fell in early European trading, but rebounded slightly afterwards.