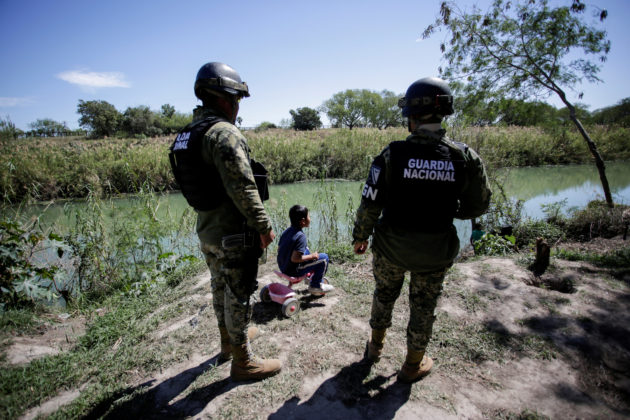 FILE PHOTO: A migrant boy, an asylum seeker sent back to Mexico from the U.S. under the "Remain in Mexico" program officially named Migrant Protection Protocols (MPP), is seen near two members of the Mexican National Guard at a provisional campsite near the Rio Bravo in Matamoros, Mexico February 27, 2020. Picture taken February 27, 2020. REUTERS/Daniel Becerril/File Photo

WASHINGTON (Reuters) – The United States faces a court-ordered deadline this weekend to resume a controversial immigration program that forced tens of thousands of migrants to wait in Mexico for the resolution of their U.S. asylum cases.

The 5th U.S. Circuit Court of Appeals late on Thursday night denied a request by President Joe Biden’s administration to delay the effective date of a lower court judge’s ruling a week earlier ordering the program restarted by Saturday.

The ruling undercuts Biden’s decision earlier this year to end the Migrant Protection Protocols (MPP) program, which was put in place by his Republican predecessor, former President Donald Trump. Democrats and immigration advocates criticized the MPP program, informally known as “remain in Mexico,” saying it subjected mostly Central American migrants to unsanitary conditions and violence in the United States’ neighbor to the south.

Arrests of migrants caught crossing the U.S.-Mexico border have reached 20-year highs in recent months, a trend Republicans pin on Biden’s reversal of MPP and other hard-line Trump immigration policies. Still, the Biden administration has left in place a Trump-era health order that allows border authorities to expel migrants to Mexico without the chance to seek asylum in the United States.

The ruling by the conservative-leaning 5th Circuit said the Biden administration must implement the MPP program in “good faith,” which appears to leave the government some discretion in how to move forward.

If the implementation efforts are “thwarted” by a lack of cooperation from Mexico, the appeals court wrote, the administration will still be considered to be in compliance with the lower court order calling for the program restart.

The U.S. Department of Justice did not immediately respond to a request for comment asking whether it would appeal the decision to the Supreme Court.

(Reporting by Ted Hesson in Washington; Editing by Kristina Cooke and Jonathan Oatis)