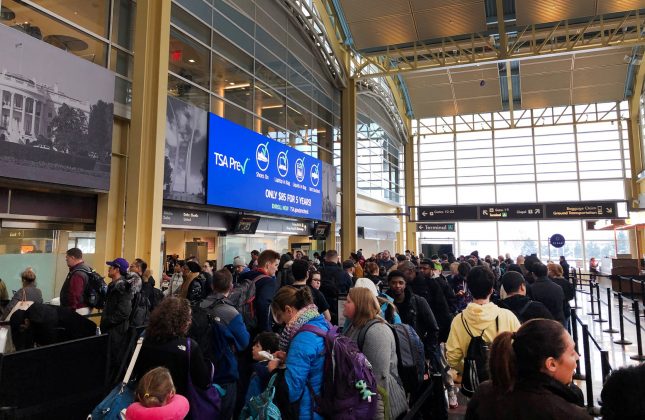 WASHINGTON (Reuters) – A partial government shutdown entered its 24th day on Monday as talks between U.S. President Donald Trump and congressional Democrats remained stalled even as some of Trump’s fellow Republicans called on the president to cut a deal and strains mounted nationwide.

Trump appeared unmoved to act, however, retweeting criticism of House Speaker Nancy Pelosi and Senate Democratic Leader Chuck Schumer that urged the top Democratic leaders to negotiate with him over funding for his long-promised wall along the U.S.-Mexico border.

“I’ve been waiting all weekend. Democrats must get to work now. Border must be secured!” Trump wrote in an early morning tweet on Monday.

Democrats have rejected Trump’s demand for $5.7 billion for the border wall in addition to other border funds but have said they would support $1.3 billion to bolster border security in other ways, including beefing up the number of Border Patrol agents and increasing surveillance.

About one-quarter of the U.S. government shut down last month as Republicans controlled both chambers of Congress as well as the White House. In December Trump said he would take responsibility for the shutdown but has since shifted the blame to Democrats. A growing proportion of Americans blame Trump for the closures, a Reuters/Ipsos poll found.

He now must win concessions from the Democrats, who took over the U.S. House of Representatives this month following November’s elections. He also must win over enough Senate Democrats to secure the 60 votes needed to pass funding legislation there.

The stress from the shutdown became more visible as 800,000 federal employees across the United States missed their first paychecks on Friday. The cut government services also affected travelers as a jump in unscheduled absences among federal airport security screeners forced partial closures of airports in Houston and Miami.

National parks also remain shuttered, food and drug inspections have been curtailed and key economic data is on hold, among other impacts. Federal courts are set to run out of money on Friday.

Later on Monday, Trump is scheduled to address a New Orleans gathering of farmers, a key bloc of Trump supporters who have been hit by the shutdown as federal loan and farm aid applications have stalled and key farming and crop data has been delayed.

Republican U.S. Senator Lindsey Graham, who last week had called on Trump to declare a national emergency as a way to get money to build his wall, on Sunday urged the president to instead reopen the government for a short period of time in an effort to restart talks before taking such action.

Declaring a national emergency over immigration issues is fiercely opposed by Democrats and remains unpopular with some Republicans. It also would likely face an immediate legal challenge.

Pelosi called on the Republican-led Senate to vote on several bills passed earlier this month by the House to fund affected departments that do not include money for Trump’s wall. Senate Majority Leader Mitch McConnell has said he will not take up any legislation that does not have Trump’s support.

Representatives for Schumer could not be immediately reached for comment on Monday.

Both the Senate and the House were scheduled to reconvene on Monday afternoon, despite a weekend winter storm shuttered much of the Washington area and it remained unclear what, if any, steps lawmakers might take to address the lapsed funding measures for affected agencies.

Senator Chris Coons on Monday reiterated fellow Democrats’ call for Trump to reopen the government while negotiations over the wall and immigration continue.

He acknowledged efforts by Graham and other Republicans to forge a temporary solution but said Trump has been unpredictable even among fellow conservatives with ever-shifting positions.

“Every time they make progress, the president throws cold water on it,” Coons told CNN in an interview.