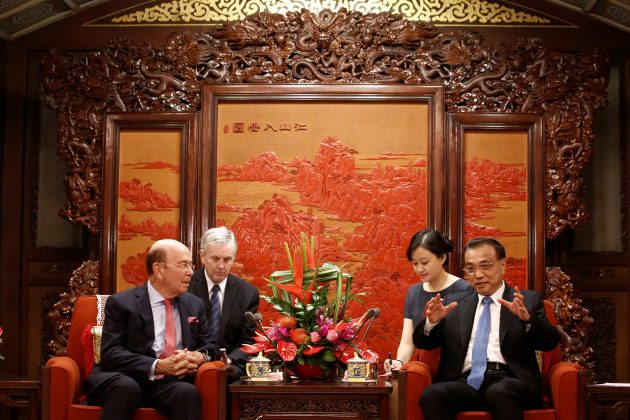 Trump will likely visit China in November as part of a trip that will take him to an Association of Southeast Asian Nations (ASEAN) summit in the Philippines and an Asia-Pacific Economic Cooperation (APEC) summit in Vietnam.

China’s relationship with the United States has been strained by the Trump administration’s criticism of China’s trade practices and by demands that Beijing do more to pressure North Korea to halt its nuclear weapons and missiles programs.

“We are looking forward to a very good session including a lot of American CEOs and we hope there will be some very good deliverables,” Ross said, in comments in front of reporters.

Li told Ross that the two countries’ common interests far outweighed their differences and their economic and trade relationship had enormously benefited both countries and the world.

“In addition to that, China and the United States are the largest trading partners with each other, so I think it is fair to say that our common interests far outweigh our differences and divergences,” he added.

“Over the years, economic and trade relations between our two countries have always served as a ballast for our overall bilateral relationship and also these important trade and economic relations have benefited enormously our two peoples as well as the whole world.”

State media quoted Li as further saying that China hopes the United States will give fair treatment to Chinese companies’ investments there, as well as ease restrictions on high-tech exports.

Meeting earlier in the day, Chinese Commerce Minister Zhong Shan told Ross that there was huge potential for cooperation and China was willing to “manage and control” disputes, the ministry said in a statement.

China was willing to create good conditions for Trump’s visit and ensure his trip was fruitful, Zhong added.

Xi and Trump met for the first time in person at Trump’s Mar-A-Lago estate in Florida in April. Trump has since played up his personal relationship with Xi, even when criticizing China over North Korea and trade.

The two sides launched a 100-day economic plan at that meeting, including some industry-specific announcements such as the resumption of American beef sales in China.

There has since been limited progress on trade relations.

Ross’s visit comes at a time of heightened trade tensions between the United States and China following Trump’s decision earlier this month to block a Chinese-backed private equity firm from buying a U.S.-based chipmaker.

In August, Trump authorized an inquiry into China’s alleged theft of intellectual property – the first direct trade measure by his administration against Beijing.

During his campaign, Trump vowed repeatedly to declare China a currency manipulator once in office but in April backed off from that threat.

Trump’s administration has also repeatedly called on China to do more to rein in North Korea and has threatened new sanctions on Chinese banks and other firms doing business with Pyongyang.

China says it is already doing all it can to pressure North Korea and that those countries directly involved in the stand-off on the peninsula should take responsibility for resolving tensions.

There was no mention of North Korea in the comments Li and Ross made in front of reporters.