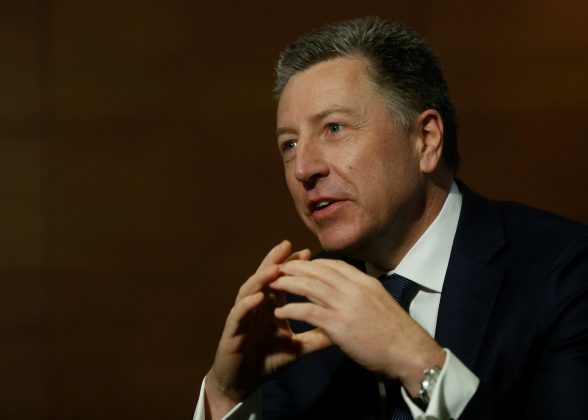 KIEV (Reuters) – The release of two Crimean Tatars from Russian custody this week was a good sign and hopefully means Russia will take positive steps in eastern Ukraine as well, the U.S. special envoy to the Ukraine peace talks said on Saturday.

Ukraine and Russia are at loggerheads over Russia’s annexation of the Crimean peninsula in 2014 and support for separatists in the Donbass region in a conflict that has killed more than 10,000 people despite a notional ceasefire.

Russia unexpectedly released a pair of Tatar activists on Wednesday thanks partly to an intervention by Turkish President Tayyip Erdogan. They have vowed to return to Crimea to campaign for the release of other prisoners.

“The fact that they were released is a small positive sign,” Kurt Volker told Reuters on a visit to Kiev, where he met the freed men. “It’s the kind of thing you hope you could build on that, Russia would build on that with some other steps with the Donbass,” he added.

A former ambassador to NATO, Volker was appointed in July by the Donald Trump administration to help resolve the Donbass conflict, which Washington cites as a key obstacle to better relations between the United States and Russia.

A recent sticking point is whether and how the United Nations should send a peacekeeping force to the region. Volker met Kremlin aide Vladislav Surkov in October for talks on this, which he said produced no breakthroughs but were “constructive”.

“What we are doing, is we are seeing whether we can create some common ideas for how a peacekeeping force could be useful in resolving the conflict,” Volker said, saying the force could only be effective with a stronger mandate than Russia envisages.

Russia denies sending its own troops or sophisticated weaponry to helping the separatists.

Volker blamed Russian aggression for the Donbass conflict but said a realization on Russia’s part that the violence is against its interests could spur a change in Moscow’s behavior.

“The real issue is Russia’s decision-making. Until now, Russia has been holding this territory, keeping this conflict alive, hoping that it provides some leverage over Ukraine,” Volker said.

“The reality has sunk in I believe that this has actually produced the opposite. It has produced a Ukraine that is more unified, more nationalist, more anti-Russian, more westward-looking than ever existed before.”

“No-one has any worry about someone defending themselves unless they are an aggressor, so it should not be that controversial an issue,” Volker said.