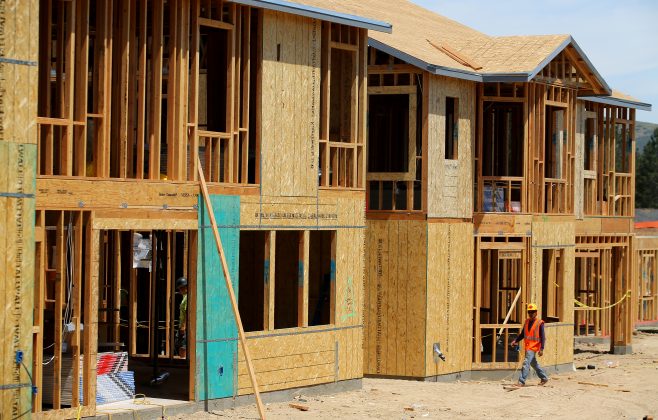 WASHINGTON (Reuters) – U.S. homebuilding unexpectedly fell in May, but data for the prior two months was revised higher and building permits increased, suggesting that the housing market was drawing some support from a sharp decline in mortgage rates.

Housing starts dropped 0.9% to a seasonally adjusted annual rate of 1.269 million units last month amid a drop in the construction of single-family housing units, the Commerce Department said on Tuesday.

Data for April was revised up to show homebuilding rising to a pace of 1.281 million units, instead of increasing to a rate of 1.235 million units as previously reported. Housing starts in March were also stronger than initially estimated.

Economists polled by Reuters had forecast housing starts edging up to a pace of 1.239 million units in May. Single-family housing starts fell in the Northeast, the Midwest and West, but rose in the South, where the bulk of homebuilding occurs.

Building permits rose 0.3% to a rate of 1.294 million units in May. It was the second straight monthly increase in permits. Building permits have been weak this year, with much of the decline concentrated in the single-family housing segment. The housing market hit a soft patch last year and has been a drag on economic growth for five straight quarters.

The sector is being constrained by land and labor shortages, which are making it difficult for builders to fully take advantage of lower borrowing costs. As a result, the housing market continues to struggle with tight inventory, leading to sluggish sales growth.