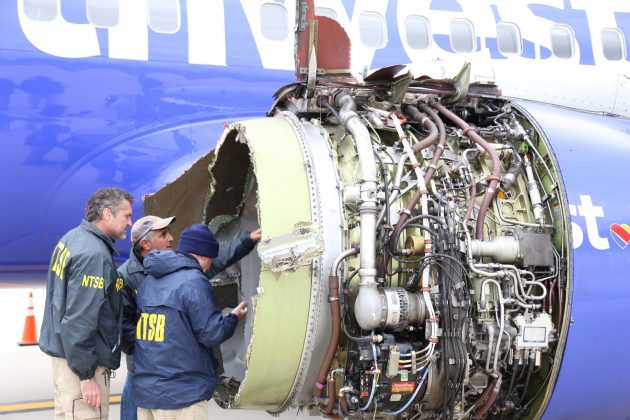 U.S. NTSB investigators are on scene examining damage to the engine of the Southwest Airlines plane in this image released from Philadelphia, Pennsylvania, U.S., April 17, 2018. NTSB/Handout via REUTERS

(Reuters) – The National Transportation Safety Board on Wednesday was inspecting the wrecked engine of a Southwest Airlines Co jet that blew up in mid air, killing a passenger in the first deadly U.S. commercial airline accident in nine years.

NTSB officials retrieved the flight data recorder from the Boeing 737-700, which will be sent to Washington for review, as airlines around the world stepped up inspection of engines on that model of aircraft.

Southwest Flight 1380, which took off from New York for Dallas, Texas, with 144 passengers and five crew members aboard, made an emergency landing in Philadelphia on Tuesday after an engine on the plane ripped apart, killing bank executive Jennifer Riordan, 43. 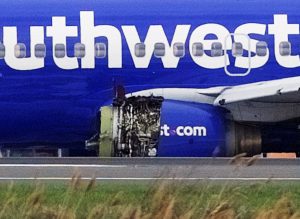 Emergency personnel monitor the damaged engine of Southwest Airlines Flight 1380, which diverted to the Philadelphia International Airport this morning after the airline crew reported damage to one of the aircraft’s engines, on a runway in Philadelphia, Pennsylvania U.S. April 17, 2018. REUTERS/Mark Makela

It was the second incident involving a failure of the same sort of engine, the CFM56, made by a partnership of France’s Safran and General Electric, on a Southwest jet in the past two years.

Passengers described scenes of panic as a piece of shrapnel from the engine shattered a window on the aircraft, almost sucking a female passenger out.

“All I could think of in that moment was, I need to communicate with my loved ones,” passenger Marty Martinez told ABC’s Good Morning America on Wednesday. During the incident, he logged on to the plane’s in-flight WiFi service to send messages to his family.

“I thought, these are my last few moments on Earth and I want people to know what happened,” Martinez said.

Southwest Airlines experienced an unrelated safety incident early on Wednesday when a Phoenix-bound flight was forced to land at Nashville airport shortly after takeoff because of bird strike.

The airline said it would inspect the fan blades of CFM56 engines on all of its 737 jets within 30 days. Minimal flight disruptions may result, it said.

NTSB Chairman Robert Sumwalt said on Tuesday at the Philadelphia airport that a preliminary investigation found an engine fan blade missing, having apparently broken off, and that there was metal fatigue at the point where it would normally be attached.

Sumwalt said the investigation could take 12 to 15 months to complete.

In August 2016, a Southwest flight made a safe emergency landing in Pensacola, Florida, after a fan blade separated from the same type of engine and debris ripped a hole above the left wing. That incident prompted the U.S. Federal Aviation Administration to propose last year that similar fan blades undergo ultrasonic inspections and be replaced if they failed.

Riordan’s death was the first in a U.S. commercial aviation accident since 2009, according to NTSB statistics.

Riordan was a Wells Fargo banking executive and well-known community volunteer from Albuquerque, New Mexico, according to a Wells Fargo official, who spoke on condition of anonymity.