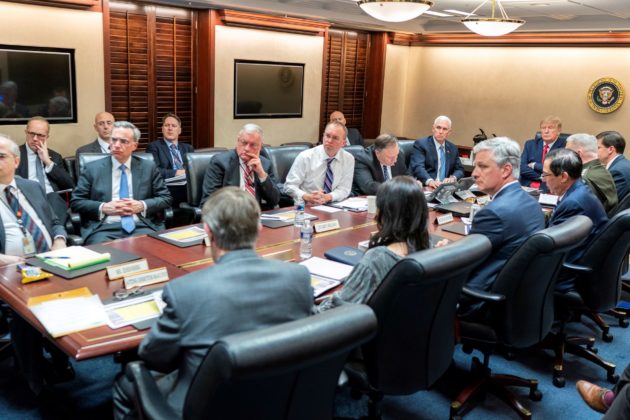 DUBAI/BAGHDAD (Reuters) – Iran spurned the U.S. president’s call for a new nuclear pact and its commanders threatened more attacks, after both sides backed off from intensified conflict following the U.S. killing of an Iranian general and Tehran’s retaliatory missile strikes.

But each side’s next move in their protracted shadow war was uncertain, although Iranian generals resumed their habitual barrage of warnings to Washington.

Trump’s Democratic critics have accused him of reckleness in his handling of Iran.

But analysts say that in an election year, he wants to avoid getting into a drawn-out conflict. In turn, Iran will try to avert direct confrontation with superior U.S. forces but can call on proxy militias across the region as U.S. sanctions bite.

Iran fired missiles on Wednesday at bases in Iraq where U.S. troops were stationed in retaliation for the killing in a U.S. drone attack of powerful Iranian general Qassem Soleimani in Baghdad on Jan. 3.

The actions followed months of tension that has increased steadily since Trump pulled the United States out of Iran’s nuclear pact with world powers in 2018 and reimposed sanctions that have driven down Tehran’s oil exports and hammered its economy.

Trump told Americans in an address on Wednesday: “The fact that we have this great military and equipment, however, does not mean we have to use it. We do not want to use it”.

The Iranian missiles fired on military bases in Iraq had not harmed any U.S. troops, he said. Iran “appears to be standing down, which is a good thing for all parties concerned,” he said.

Trump also said it was time for world powers to replace the 2015 nuclear accord with a new deal that would allow Iran to “thrive and prosper”.

But Trump, who was impeached last month, also said he would impose more stringent sanctions on Iran, without giving details.

Iran’s U.N. ambassador Majid Takht Ravanchi said in response that Tehran could not trust any idea of dialogue when Trump was threatening to intensify the “economic terrorism” of sanctions, the official news agency IRNA reported.

Iran’s powerful Revolutionary Guards also issued new threats to Washington, with one senior commander warning of “harsher revenge soon” and another saying Wednesday’s missile strikes were only the start of a series of attacks across the region.

The new head of the Quds Force, which handles Iran’s foreign military operations, said he would follow the course pursued by his slain predecessor Soleimani.

“We will continue in this luminous path with power,” Brigadier General Esmail Ghaani said.

Soleimani was a national hero whose funeral drew vast crowds of mourners. The West saw him as a dangerous and ruthless enemy.

The military comments contrasted with Wednesday’s remarks by Iranian Foreign Minister Javad Zarif, who said Tehran did not want an escalation.

Despite tough talk, analysts said Iran would not seek a conventional war with Washington although it might turn to allied forces in the area.

He said there might be a chance for a negotiated solution to the latest standoff as “the Trump administration does not appear to actively pursue a war and Iran needs sanctions relief”.

Trump has often criticized his predecessors for involving the United States in long and costly foreign wars.

Washington said it had indications Tehran was telling its allies to refrain from new action against U.S. troops.

U.S. Vice President Mike Pence, speaking on Fox News, said: “We continue to receive word that Iran is standing down, but at the president’s direction we’re going to remain vigilant.”

In neighboring Iraq, Muslim Shi’ite groups opposed to the U.S. presence there also sought to cool emotions that have been running high for weeks.

Moqtada al-Sadr, an influential Shi’ite cleric opposed to U.S. and Iranian interference in Iraq, said the crisis was over and called on “Iraqi factions to be deliberate, patient, and not to start military actions”.

Kataib Hezbollah, an Iran-backed militia the United States blamed for an attack in Iraq in December that killed a U.S. contractor, said “passions must be avoided to achieve the desired results” of expelling U.S. forces.

Washington said Iran launched 16 short-range ballistic missiles in Wednesday’s strikes, with at least 11 hitting Iraq’s al-Asad air base and one striking a facility in Erbil.

Satellite pictures of al-Asad base before and after the strikes showed damage, including to aircraft hangers.

The images offered limited insight into Iran’s strategy but gave some indication of missile accuracy, an analyst said.

“The impacts are not scattershot across empty fields or airstrips on the southern side of the base,” Dara Massicot, policy researcher at RANDCorporation, said, adding that they did not appear to be purely symbolic strikes.

U.S. and European government sources said they believed Iran had deliberately sought to avoid U.S. military casualties in its missile strikes to prevent an escalation.

One thought on “U.S., Iran draw back from brink but new threats show crisis not over”