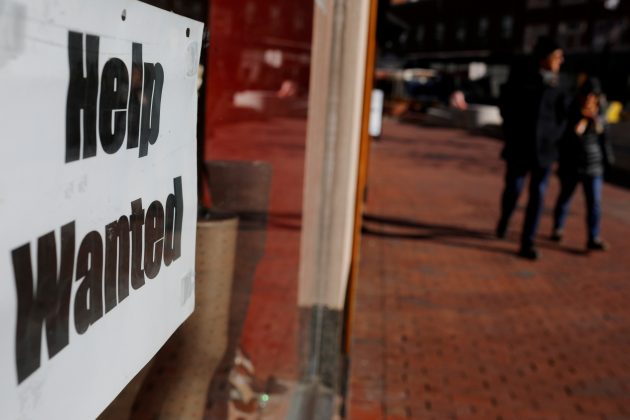 WASHINGTON (Reuters) – U.S. job openings dropped to an 11-month low in February and hiring decreased, which could partially explain a sharp slowdown in job growth during that month.

Still, the labor market remains a pillar of support for the economy amid signs that activity was easing because of the fading boost from a $1.5 trillion tax cut package and the effects of interest rate increases over the last few years. The economy is also facing headwinds from slowing global growth and the United States’ trade war with China.

“The February job openings data reinforced that the labor market weakened in February but there isn’t any cause for concern,” said Ryan Sweet, a senior economist at Moody’s Analytics in West Chester, Pennsylvania.

Job openings, a measure of labor demand, tumbled by 538,000 to a seasonally adjusted 7.1 million, the Labor Department said in its monthly Job Openings and Labor Turnover Survey, or JOLTS, report on Tuesday. The drop was the biggest since August 2015. The level was the lowest since March 2018.

Vacancies in the accommodation and food services industry fell by 103,000 jobs in February. There were 72,000 fewer job openings in the real estate and rental and leasing sector. Job openings in the transportation, warehousing and utility sector dropped by 66,000.

Nonfarm payrolls increased by only 33,000 jobs in February, the fewest since September 2017. The near-stall in job gains was partially blamed on colder weather and also viewed as payback after robust increases in December and January.

Job growth picked up in March, with the economy creating 196,000 positions, the government reported last Friday.

The drop in job openings in February likely does not change the theme of labor shortages in the economy. A survey of small businesses published on Tuesday found that just over a fifth of owners reported difficulties finding qualified workers as their “single most important business problem” in March.

According to the survey from the NFIB, 39 percent of small business owners reported job openings they could not fill in March. Thirty-three percent said they had openings for skilled workers and 14 percent have vacancies for unskilled labor.

“There are still millions of help wanted signs out there in the country so we hesitate to revise our outlook for the labor market overall,” said Chris Rupkey, chief economist at MUFG in New York.

The dive in job openings in February pushed down the vacancies rate to 4.5 percent from 4.8 percent in January. Hiring fell to 5.7 million in February from 5.8 million in the prior month. The decrease in hiring was led by the construction sector, where hiring fell by 73,000.

Hiring in the nondurable goods manufacturing industry dropped by 33,000 in February. Hiring by state and local government education departments fell 22,000.

The number of workers voluntarily quitting their jobs was little changed at 3.5 million in February, keeping the quits rate at 2.3 percent for a ninth straight month.

The quits rate is viewed by policymakers and economists as a measure of job market confidence. The worker reluctance to switch jobs is despite the tight labor market conditions that are steadily driving up wages.

“This is not as many quits as you would expect in such a tight labor market, when workers are in higher demand,” said Nick Bunker, an economist at Indeed Hiring Lab. “Though perhaps this isn’t surprising in the short term given that the ratio of unemployed workers to job openings has been rising.”

Layoffs increased in February, lifting the layoffs rate to 1.2 percent from 1.1 percent in January. There were increases in layoffs in the professional and businesses services, and healthcare and social assistance sectors in February.