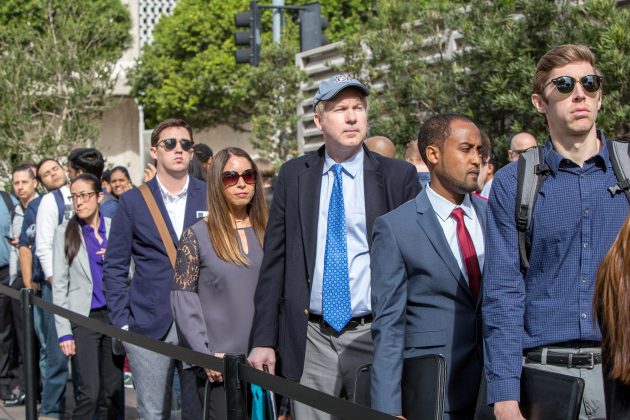 WASHINGTON (Reuters) – U.S. job openings rebounded sharply in March, while the pace of hiring was little changed, pointing to a growing worker shortage that could slow employment growth this year.

Despite the tightening labor market conditions, the report from the Labor Department on Tuesday also showed workers still reluctant to voluntarily quit their jobs in droves to seek opportunities elsewhere. The scarcity of workers poses a risk to the economy’s growth prospects. The economy will mark 10 years of expansion in July, the longest in history.

“The risks right now for the economic outlook going forward is there is actually a danger that companies will run out of the help they need to produce goods or sell their services,” said Chris Rupkey, chief economist at MUFG in New York.

“The U.S. economy has never faced a time when labor shortages might endanger or cut short a long economic expansion, but now it does.”

Job openings, a measure of labor demand, surged by 346,000 to a seasonally adjusted 7.5 million, the Labor Department’s monthly Job Openings and Labor Turnover Survey, or JOLTS, showed. The job openings rate rose to 4.7 percent from 4.5 percent in February.

Hiring was little changed at 5.7 million in March. The hiring rate was steady at 3.8 percent. The lag in hiring suggests employers are experiencing difficulties finding qualified workers, a trend that implies a slowdown in job growth later this year.

There is growing anecdotal evidence of worker shortages, especially in the transportation, manufacturing and construction industries. The economy created 263,000 jobs in April, with the unemployment rate dropping two-tenths of a percentage point to 3.6 percent, the government reported last Friday.

Economists expect job growth to slow to about 150,000 per month this year, still well above the roughly 100,000 needed to keep pace with growth in the working age population.

In March, there were 0.83 job seekers for every job opening. Job openings exceeded the number of unemployed by 1.3 million. Vacancies have outpaced the unemployed for 13 straight months.

The number of workers voluntarily quitting their jobs was little changed at 3.4 million in March, keeping the quits rate at 2.3 percent for a 10th straight month.

“You have to hand it to the business community. Despite being on the wrong side of the tight labor market, firms are managing to keep from a major bidding war for workers and are still not losing workers to competitors,” said Joel Naroff, chief economist at Naroff Economic Advisors in Holland, Pennsylvania.

Layoffs slipped in March, lowering the layoffs rate to 1.1 percent from 1.2 percent in the prior month. Layoffs fell in the government sector, but rose slightly in manufacturing and construction. The increase in manufacturing layoffs likely reflected redundancies in the automobile sector, which is experiencing slowing sales and an inventory overhang.

“Layoffs and discharges are extremely low, by historical standards, which reflects that employers need their workers and are prepared to make an effort to retain them,” said Julia Pollak, labor economist at employment marketplace ZipRecruiter.