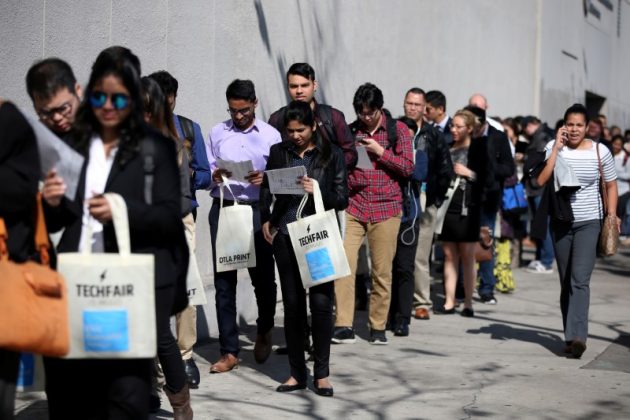 Initial claims for state unemployment benefits rose 24,000 to a seasonally adjusted 242,000 for the week ended March 31, the Labor Department said on Thursday. Data for the prior week were revised to show 3,000 more claims received than previously reported.

The labor market is considered to be near or at full employment. The jobless rate is at a 17-year low of 4.1 percent, not too far from the Federal Reserve’s forecast of 3.8 percent by the end of this year.

The Labor Department said claims for Maine and Colorado were estimated last week. It also said claims-taking procedures in Puerto Rico and the Virgin Islands had still not returned to normal after the territories were devastated by Hurricanes Irma and Maria last year.

The four-week moving average of initial claims, viewed as a better measure of labor market trends as it irons out week-to-week volatility, rose 3,000 to 228,250 last week.

The claims data has no bearing on March’s employment report, which is scheduled for release on Friday. According to a Reuters survey of economists, nonfarm payrolls probably increased by 193,000 jobs in March. The unemployment rate is forecast falling one-tenth of a percentage point to 4.0 percent.

Economists are optimistic that tightening labor market conditions will start boosting wage growth in the second half of this year. That should help to support consumer spending, which slowed at the start of the year.

The claims report also showed the number of people receiving benefits after an initial week of aid fell 64,000 to 1.81 million in the week ended March 24, the lowest level since December 1973. The four-week moving average of the so-called continuing claims dropped 13,500 to 1.85 million, the lowest reading since January 1974.