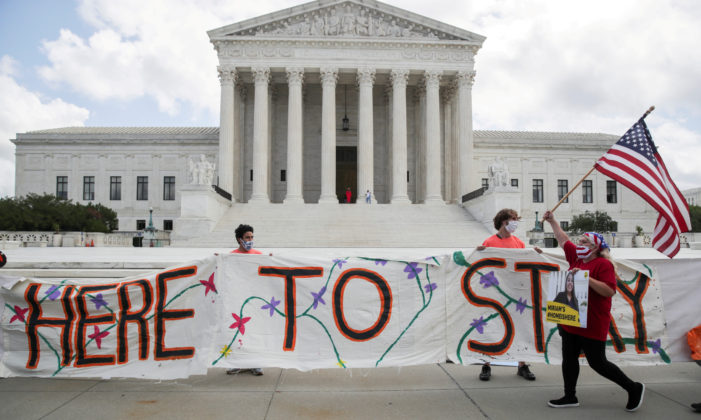 FILE PHOTO: DACA recipients and their supporters celebrate outside the U.S. Supreme Court after the court ruled in a 5-4 vote that U.S. President Donald Trump's 2017 move to rescind the Deferred Action for Childhood Arrivals (DACA) program, created in 2012 by his Democratic predecessor Barack Obama, was unlawful, in Washington, U.S. June 18, 2020. REUTERS/Jonathan Ernst/File Photo

By Mimi Dwyer and Ted Hesson

(Reuters) – A Texas-led coalition of nine states will urge a federal judge on Tuesday to invalidate a program that grants hundreds of thousands of immigrants brought to the United States as children the right to live and work in the country.

The states have argued that the program, known as Deferred Action for Childhood Arrivals (DACA), was not created lawfully by former President Barack Obama in 2012.

The case could upend the lives of the nearly 650,000 immigrants who are beneficiaries of the program, which protects them from deportation, allows them to work, grants access to driver’s licenses, and in some cases improves access to financial aid for education.

The DACA program has withstood a number of challenges since its creation, including a move by Republican President Donald Trump in 2017 to end it.

The Supreme Court did not rule on the overarching legality of the DACA program. A ruling on the challenge brought by Texas and the other states, which is being heard by U.S. District Judge Andrew Hanen, could address that question.

(Reporting by Mimi Dwyer in Los Angeles and Ted Hesson in Washington; Editing by Bill Berkrot)