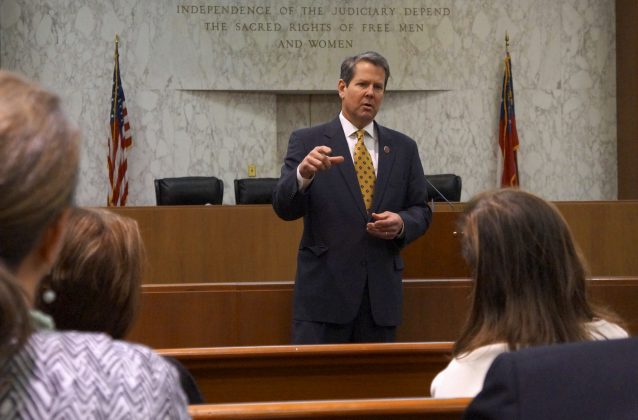 (Reuters) – A federal judge will not force Georgia to use paper ballots for the November election, citing the potential for last-minute confusion, but expressed concern that the state’s electronic machines could be vulnerable to hacking.

U.S. District Judge Amy Totenberg said in a ruling late on Monday that while it is important for citizens to know their ballots are properly counted, voters also must rely on a smooth process, especially in a fast-approaching election race.

“Ultimately, any chaos or problems that arise in connection with a sudden rollout of a paper ballot system with accompanying scanning equipment may swamp the polls with work and voters – and result in voter frustration and disaffection from the voting process,” Totenberg said in a 46-page decision.

The state’s November contests include a gubernatorial race that is among the most high-profile in the country. Democrat Stacey Abrams faces Secretary of State Brian Kemp, who is responsible for the state’s elections and is named as a defendant in the lawsuit.

If elected, Abrams would be the first black female governor in the United States.

Georgia is one of five states that use touchscreen machines with no paper record.

Voting rights groups and individual voters sued Georgia officials in 2017, alleging that the electronic machines are highly vulnerable to hacking and cannot be audited or verified. The judge’s decision to reject their request to require paper ballots in November does not affect the underlying lawsuit, which will continue.

An attorney for the plaintiffs, David Cross, said that while they were disappointed the judge had not imposed paper ballots for November, her decision was nevertheless a victory because she agreed the current election system is “woefully inadequate and insecure.”

Georgia has used direct-recording electronic (DRE) voting machines exclusively since 2002. The machines have drawn criticism from various advocacy groups and federal agencies, including U.S. Department of Homeland Security officials who called the systems a “national security concern” in March, according to Totenberg.

“Plaintiffs shine a spotlight on the serious security flaws and vulnerabilities in the state’s DRE system,” Totenberg said in the court order.

A representative from Kemp’s office did not immediately respond to a request for comment on Tuesday. Kemp on Monday said that Georgia’s electronic voting machines are secure and that switching to paper ballots would cause “chaos,” according to the Atlantic Journal-Constitution newspaper.