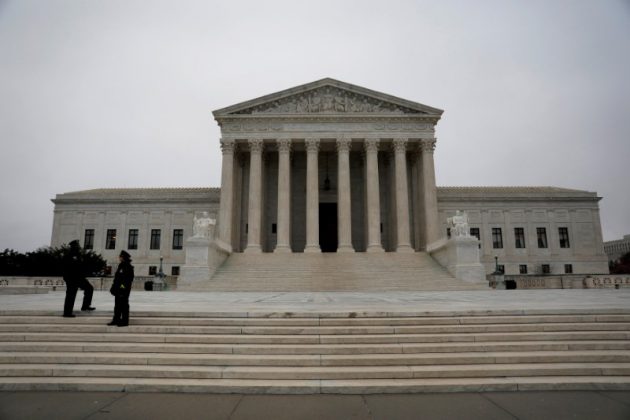 The Supreme Court is seen ahead of the Senate voting to confirm Judge Neil Gorsuch as an Associate Justice in Washington, DC, U.S. April 7, 2017. REUTERS/Aaron P. Bernstein

WASHINGTON (Reuters) – The U.S. Supreme Court on Wednesday appeared poised to expand religious rights and potentially narrow the separation of church and state after liberal and conservative justices alike signaled support for a church denied Missouri taxpayer funds for a playground project.

A ruling in favor of Trinity Lutheran Church in Columbia, Missouri in the case, one of the most important of the court’s current term, could pave the way for more public money to go to religious entities.

Justices across the nine-member court’s ideological spectrum indicated that Trinity Lutheran should be allowed to apply for the Missouri grant program that helps nonprofit groups buy rubber playground surfaces made from recycled tires. The church runs a preschool and daycare center.

“It does seem as though this is a clear burden on a constitutional right,” liberal Justice Elena Kagan said during a one-hour argument, referring to Missouri’s prohibition.

A ruling is due by the end of June. It is unclear how far the justices will go in setting a precedent that would give states more leeway to fund religious entities directly.

The dispute pits two provisions of the U.S. Constitution’s First Amendment against each other: the guarantee of the free exercise of religion and the Establishment Clause, which requires the separation of church and state.

A broad ruling favoring the church could bolster religious conservatives who favor weakening the wall between church and state, including using taxpayer money to pay for children to attend private religious schools rather than public schools. President Donald Trump’s education secretary, Betsy DeVos, is a prominent supporter of such “school choice” plans.

Trinity Lutheran, whose legal effort was spearheaded by the Alliance Defending Freedom conservative Christian activist group, could be headed for a lopsided win, with liberals Kagan and Stephen Breyer joining conservative justices in signaling support.

Missouri’s constitution bars “any church, sect or denomination of religion” from receiving state money, language that goes further than the U.S. Constitution’s separation of church and state.

Breyer questioned whether denying churches access to the playground grant money would be akin to refusing to provide police or fire services.

Conservative Justice Samuel Alito said several federal grant programs are open to religious entities, including one that provides money to enhance security at buildings where there is a risk of terrorist attack.

Synagogues, mosques and religious schools have received funding under that program, according to a brief filed by a Jewish group supporting the church’s position.

Alito asked Missouri’s lawyer, James Layton, if religious entities would be barred from applying if Missouri had a similar program. Layton said they would be prohibited.

Trinity Lutheran argued that Missouri’s policy violates its right to exercise religion as well as the U.S. Constitution’s promise of equal protection under the law. Missouri has said there is nothing unconstitutional about its grant program, noting that Trinity Lutheran remains free to practice any aspect of its faith however it wishes despite being denied state funds.

The court’s newest justice, Trump’s conservative appointee Neil Gorsuch, is known for an expansive view of religious rights. Gorsuch asked Layton why it is acceptable for Missouri to ban religious entities in some instances, such as with the playground program, but not in others, including safety and health services.

Liberal Justice Sonia Sotomayor was the most outspoken in backing Missouri’s ban, noting the difficulty states could face determining whether funds going to a religious entity are being used for a secular purposes.

“How do you separate out its secular function from its religious function?” Sotomayor asked.

Three-quarters of the U.S. states have provisions similar to Missouri’s barring funding for religious entities.

Missouri’s Republican governor, Eric Greitens, last Thursday reversed the state policy that had banned religious entities from applying for the grant money, saying it was wrong for “government bureaucrats” to deny grants to “people of faith who wanted to do things like make community playgrounds for kids.”

A Trinity Lutheran victory could help religious organizations nationwide win public dollars for certain purposes, such as health and safety. It also could buttress the case for using publicly funded vouchers to send children to religious schools.

A challenge to a 2015 court decision invalidating a Colorado voucher program is pending before the justices, awaiting the Trinity Lutheran case’s outcome.

Trinity Lutheran sued Missouri in federal court in 2012. The St. Louis-based 8th U.S. Circuit Court of Appeals in 2015 upheld a trial court’s dismissal of the suit, and the church appealed to the Supreme Court.

One thought on “U.S. justices lean toward church in key religious rights case”