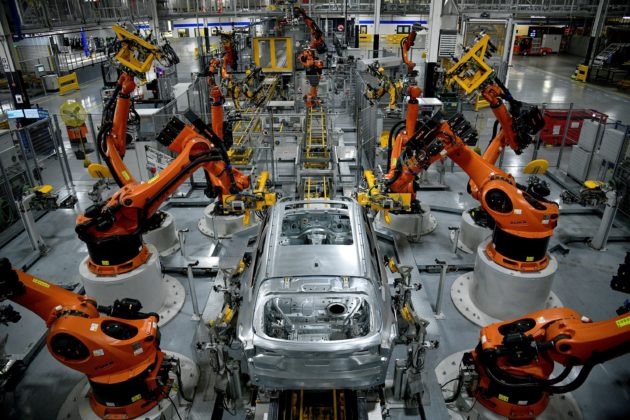 WASHINGTON (Reuters) – U.S. manufacturing activity grew at a slower pace in July for the second straight month as raw material shortages persisted, though there are signs of some easing in supply-chain bottlenecks.

The survey from the Institute for Supply Management (ISM) on Monday showed a measure of prices paid by manufactures fell by the most in 16 months, while the supplier deliveries index retreated further from a 47-year high touched in May.

Timothy Fiore, chair of ISM’s manufacturing business survey committee, noted that “supply and demand dynamics appear to be moving closer to equilibrium for the first time in many months.” Part of that could be because spending is rotating back to services from goods.

“Moderation in supplier deliveries and prices paid indicate bottlenecks are alleviating, but both remain high enough to indicate supply-side problems persist. Still, from a markets and policy perspective, progress is important.”

The ISM’s index of national factory activity fell to 59.5 last month, the lowest reading since January, from 60.6 in June. A reading above 50 indicates expansion in manufacturing, which accounts for 11.9% of the U.S. economy. Economists polled by Reuters had forecast the index would be little changed at 60.9.

Seventeen out of 18 manufacturing industries reported growth in July, including machinery as well as computer and electronic products. Only textile mills reported a decline.

The ISM survey’s measure of prices paid by manufacturers fell to a reading of 85.7 last month from a record 92.1 in June, reflecting an easing in commodity prices. The drop – the largest pullback in the index since March 2020 – supports Federal Reserve Chair Jerome Powell’s contention that inflation will moderate as supply constraints abate.

The survey’s measure of supplier deliveries fell to 72.5 from a reading of 75.1 in June. The index vaulted to 78.8 in May, which was the highest reading since April 1974. A reading above 50 indicates slower deliveries.

Demand shifted to goods from services during the COVID-19 pandemic as millions of Americans were cooped up at home, straining the supply chain. Roughly half of the population has been fully vaccinated against the coronavirus, allowing people to travel, frequent restaurants, visit casinos and attend sporting events among services-related activities that were curbed early in the pandemic.

Government data last week showed spending on services accelerated sharply in the second quarter, helping to lift the level of gross domestic product above its peak in the fourth quarter of 2019.

U.S. stocks were trading higher, with the S&P 500 index near a record high as the U.S. Congress pushed ahead with a $1 trillion infrastructure bill.

The dollar fell against a basket of currencies. U.S. Treasury prices rose.

Still, anecdotes in the ISM survey suggested the supply chain was still a long way from normalizing. Machinery manufacturers said they are “having to place orders months ahead of time just to get a place in line.”

In the computer and electronics industry, manufacturers reported that “purchases continue to have long lead times due to shortages of raw materials.”

The scarcity of inputs has been well documented in the automobile industry, where a global semiconductor shortage has forced some car makers to idle assembly plants to manage their chips supply.

The ISM survey’s forward-looking new orders sub-index fell for a second straight month. But with inventories at factories very lean and business warehouses almost empty, the moderation in new orders growth is likely to reverse or remain minimal.

Businesses depleted inventories at a rapid clip in the second quarter. Stocks at retailers are well below normal levels. Economists at Goldman Sachs expect retail and auto inventories will return to normal levels in mid-2022.

Factories also hired more workers in July. A measure of factory employment rebounded after contracting modestly in June for the first time since November, though manufacturers continued to complain about the scarcity of workers.

Still, the rebound bodes well for July’s employment report, due to be released on Friday. According to a Reuters survey of economists, nonfarm payrolls likely increased by 880,000 jobs last month after rising by 850,000 in June.

The economy is facing a shortage of workers, with a record 9.2 million job openings. About 9.5 million people are officially unemployed.

Lack of affordable child care and fears of contracting the coronavirus have been blamed for keeping workers, mostly women, at home. There have also been pandemic-related retirements and career changes. Republicans and business groups have blamed enhanced unemployment benefits, including a $300 weekly payment from the federal government, for the labor crunch.

While more than 20 states led by Republican governors have ended these federal benefits before they were scheduled to run out in early September, there has been little evidence that the terminations boosted hiring.

The labor shortage is expected to ease in the fall when schools reopen for in-person learning, but a resurgence in new COVID-19 cases, driven by the Delta variant of the coronavirus, could make some people reluctant to return to the labor force.