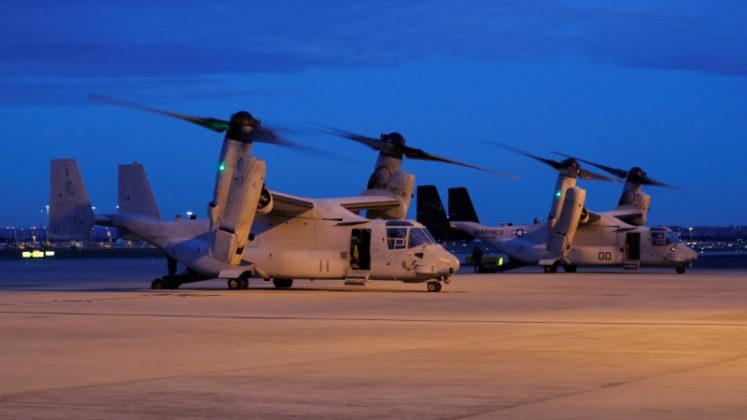 SYDNEY (Reuters) – Rescue teams were searching for three U.S. Marines missing after their aircraft crashed into the sea off Australia’s east coast on Saturday, the U.S. Marine Corps said.

Twenty-three other personnel aboard the MV-22 Osprey tilt-rotor aircraft had been rescued, the III Marine Expeditionary Force, based in Okinawa, Japan, said in a statement.

In past years, Ospreys have been involved in incidents resulting in deaths or injuries.

The aircraft had launched from the USS Bonhomme Richard (LHD 6) amphibious assault ship and was on regular operations when it hit the water, the statement said. Boats and aircraft on the ship immediately began a search-and-rescue effort.

The U.S. Marine Corps said the incident was under investigation but gave no additional information.

U.S. President Donald Trump, who was on his first full day of vacation at the Trump National Golf Club in Bedminster, New Jersey, was briefed on the situation by his chief of staff, retired Marine Corps General John Kelly, according to a White House official.

The incident took place off the coast of Shoalwater Bay, in Australia’s northeastern state of Queensland, the Australiandefense ministry said.

One person had been taken to Rockhampton hospital, a Queensland Ambulance spokesman said. He gave no further details.

The Bonhomme Richard Expeditionary Strike Group was in Australia to participate in joint training maneuvers involving more than 33,000 U.S. and Australian military personnel, which ended two weeks ago.

The exercises included the participation of MV-22 Ospreys practicing the deployment of U.S. Marine reconnaissance teams.

The Osprey, built by Boeing Co and Textron Inc’s Bell Helicopter unit, is designed to take off like a helicopter and rotate its propellers to fly like a plane.

Its development was nearly canceled after the deaths of 23 Marines during flight testing in 2000, but its speed and range have made it very popular in recent years.

In December, the U.S. military grounded its Osprey fleet in Japan after one of the aircraft ditched into the sea, injuring its crew of five when a hose connected to the aircraft broke during a refueling exercise.

Australia has sent troops to fight in the U.S.-led coalition forces in Afghanistan and Iraq.

(Reporting by Colin Packham and Tom Westbrook in SYDNEY and Jamie Freed in SINGAPORE, Jonathan Landay in WASHINGTON and Amy Tennery in BRIDGEWATER, N.J.; Editing by Angus MacSwan and Lisa Von Ahn)