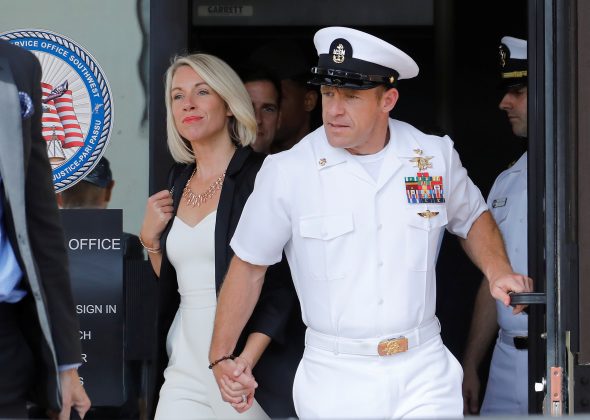 U.S. Navy SEAL Special Operations Chief Edward Gallagher (R), with wife Andrea Gallagher, leaves court after being acquitted of most of the serious charges against him during his court-martial trial at Naval Base San Diego in San Diego, California , U.S., July 2, 2019. REUTERS/John Gastaldo

SAN DIEGO (Reuters) – A U.S. Navy SEAL platoon commander acquitted of murdering a captured Islamic State fighter but convicted of unlawfully posing for photos with his dead body was sentenced on Wednesday to a demotion in rank and pay.

The penalty imposed by a seven-member jury of U.S. Marines and Navy personnel spared the defendant, Special Operations Chief Edward Gallagher, from any prison time beyond the nearly seven months he had already served in pre-trial custody.

The same jury found Gallagher not guilty on Tuesday of murder, attempted murder and other charges, including deliberately shooting at unarmed civilians and obstruction of justice. But he was found guilty of posing for unofficial pictures with a human casualty.

That offense, stemming from photos he and fellow SEAL members took with the corpse of the Iraqi prisoner whom Gallagher was acquitted of slaying, carries a maximum sentence of four months’ imprisonment.

Instead, he will receive a one-step demotion in his rank from chief petty officer to petty officer first class, presumably accompanied by a corresponding reduction in his pay. The sentence also carries a two-month forfeiture of his salary, a sum of nearly $5,400.

Still, the outcome of the court-martial, capped by a three-week trial on various war crimes charges, marked a significant legal victory for Gallagher, 40, who would have faced a possible life sentence had he been found guilty of murder or attempted murder.

One thought on “U.S. Navy SEAL reprimanded, demoted for posing with dead prisoner”