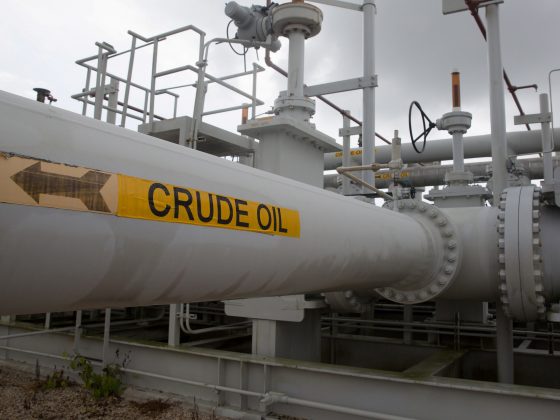 FILE PHOTO: A maze of crude oil pipes and valves is pictured during a tour by the Department of Energy at the Strategic Petroleum Reserve in Freeport, Texas, U.S. June 9, 2016. REUTERS/Richard Carson

WASHINGTON (Reuters) – The U.S. Energy Department said on Thursday it is offering up to six million barrels of sweet crude oil from the national emergency reserve in a sale mandated by a previous law to raise funds to modernize the facility.

A law U.S. President Donald Trump signed last year requires the department to hold sales to fund $300 million improvements including work on shipping terminals to the Strategic Petroleum Reserve, or SPR, which is held in caverns on the coast of Texas and Louisiana. Previous laws have also mandated sales from the reserve, which currently holds more than 649 million barrels.

While global oil prices have been rising as the production group OPEC and Russia work together to cut supplies, the sale did not appear to be an explicit signal that the United States is looking to balance the current market with the SPR. U.S. Energy Secretary Rick Perry, who has said price impacts from tapping the reserve for supply balance are often temporary, did not mention the sale in a press conference earlier on Thursday.

Still, the oil supply could tighten in coming months with the Trump administration’s imposition of sanctions on crude exports from both Iran and Venezuela’s state-owned oil company, and with the producer supply cuts from OPEC and Russia.

The timing of the mandated sale may “serve as a warning to OPEC producers that a larger deployment of the SPR in the future could undermine,” efforts to boost the oil price, at least temporarily, analysts at ClearView Energy Partners said in a note.

The delivery period for the sale will be from May 1 to May 14 for oil from the reserve’s West Hackberry and Big Hill site, and from May 1 to May 31 from the Bryan Mound site. Offers for the oil must be received by March 13, the department said.