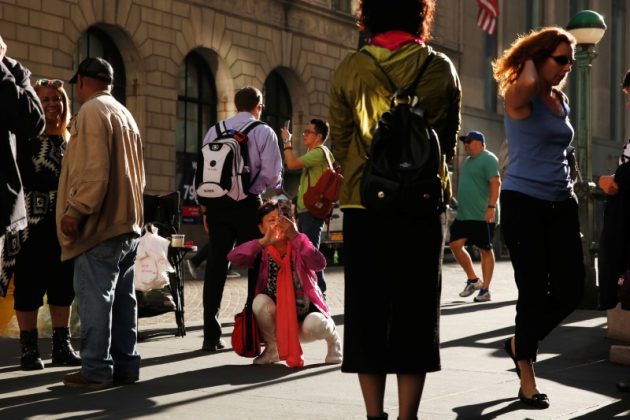 FILE PHOTO: A woman crouches down to take a cell phone photograph as pedestrians walk past in New York, U.S., October 19, 2016. REUTERS/Lucas Jackson

(Reuters) – U.S. pedestrian deaths rose sharply for the second year in a row in 2016, according to a study released on Thursday, a trend experts said mirrors increased driver cellphone use and distracted driving.

Last year saw an 11 percent rise in pedestrian deaths over 2015, making it the largest increase in the 40 years that national records have been kept, according to officials with the Governors Highway Safety Association, which represents state highway safety offices and commissioned the research.

The study’s author, Richard Retting, called the results “frankly quite startling,” adding that “there’s clearly something happening. This is not a one-off.”

Retting said that he viewed the surge as largely attributable to cellphone use, saying that while it was statistically difficult to rule out other causes entirely, the coinciding rise in deaths and cellphone use suggests a connection.

None of the other factors typically affecting pedestrian deaths – such as population growth, yearly miles driven and walked in the United States – tracked the rise as closely as cellphone use.

Retting said wireless data use on cellphones has shot up dramatically, with 2014-15, the most recent period for which numbers are available, seeing a doubling of the amount of mobile data used in the United States and a 45 percent increase in the number of multimedia messages sent.

A 2016 U.S. Department of Transportation study showed that, while overall numbers for cellphone use in 2014 and 2015 remained relatively flat, the rate of drivers holding up phones and using their hands to manipulate them had more than doubled since 2009, and among the youngest drivers had more than quadrupled.

The replacement of flip phones by smartphones has also increased the risk, said Charlie Klauer, a lead researcher at the Virginia Tech Transportation Institute.

“Smartphones are much much harder to use … and they are far more capable,” Klauer said. “Instagram, Snapchat, Facebook: All of it makes them very dangerous.”

Distracted drivers can also be difficult to catch. While 14 states ban all handheld cellphone use while driving, 32 only prohibit texting, forcing officers to prove drivers seen holding or touching phones were not doing something else, said Kara Macek, a spokeswoman for the governor’s association.

Results among states were mixed in the survey. While 34 saw an increase, 15 states and the District of Columbia saw decreases, and Maine saw no change.

(Reporting by Tom James in Seattle; editing by Patrick Enright and Cynthia Osterman)