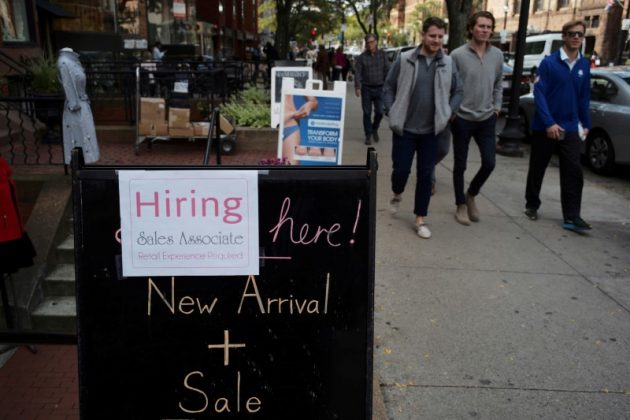 NEW YORK (Reuters) – U.S. private-sector employment growth eased in November even as the manufacturing sector added the most jobs in at least 15 years, a report by a payrolls processor showed on Wednesday.

Private employers added 190,000 jobs last month, down from an unrevised 235,000 in October, the ADP National Employment Report showed. That was roughly in line with expectations for a gain of 185,000 jobs in a Reuters poll of economists, with estimates ranging from 150,000 to 240,000.

The report is jointly developed with Moody’s Analytics.

“The job market is red hot, with broad-based job gains across industries and company sizes. The only soft spots are in industries being disrupted by technology, brick-and-mortar retailing being the best example,” Mark Zandi, chief economist of Moody’s Analytics, said in a statement. “There is a mounting threat that the job market will overheat next year.”

Among goods-producing sectors, manufacturing added 40,000 jobs, the most in the ADP series history dating back more than 15 years, while construction shed 4,000.

Services-sector employment gains led the advance, with the largest increase coming in education and health services at 54,000, followed by professional and business services at 47,000.

Midsized businesses, defined as employing between 50 and 499 people, added 99,000 jobs, while small-employer employment rose by 50,000 and large companies increased their workforces by 41,000.

The ADP figures come ahead of the U.S. Labor Department’s more comprehensive non-farm payrolls report on Friday, which includes both public and private-sector employment.

Economists polled by Reuters are looking for U.S. private payroll employment to have grown by 190,000 jobs in November, down from 252,000 the month before. Total non-farm employment is expected to have risen by 200,000.

The unemployment rate is forecast to stay steady at the 4.1 percent recorded a month earlier.