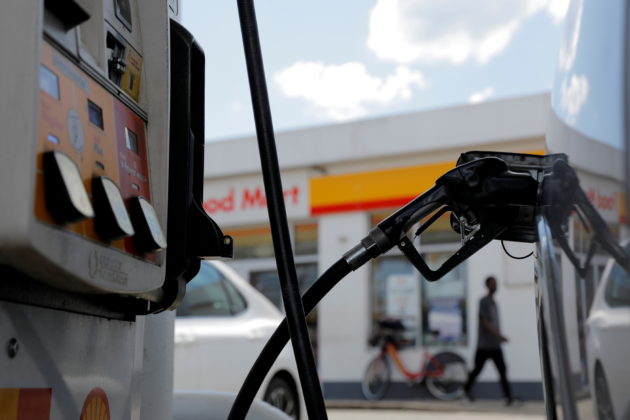 WASHINGTON (Reuters) – U.S. producer prices increased solidly in October, driven by surging costs for gasoline and motor vehicle retailing, suggesting that high inflation could persist for a while amid tight global supply chains related to the pandemic.

The Federal Reserve last week restated its belief that current high inflation is “expected to be transitory.” A tightening labor market as millions remain at home is adding to price pressures, which together with shortages of goods sharply restrained economic growth in the third quarter.

The Fed this month started reducing the amount of money it is injecting into the economy through monthly bond purchases.

“The acceleration in inflation may not fade as quickly as previously thought, particularly for businesses because of the global supply-chain issues,” said Ryan Sweet, a senior economist at Moody’s Analytics in West Chester, Pennsylvania. “Elevated inflation is turning up the heat on the Fed but they haven’t shown signs of buckling as they will stomach higher inflation to get the labor market back to full employment quickly.”

The producer price index for final demand rose 0.6% last month after climbing 0.5% in September, the Labor Department said on Tuesday. That reversed the slowing trend in the monthly PPI since spring. In the 12 months through October, the PPI increased 8.6% after a similar gain in September.

Economists polled by Reuters had forecast the PPI advancing 0.6% on a monthly basis and rising 8.7% year-on-year.

More than 60% of the increase in the PPI last month was due to a 1.2% rise in the prices of goods, which followed a 1.3% jump in September. A 6.7% surge in gasoline prices accounted for a third of the rise in goods prices. There were increases in the prices of diesel, gas and jet fuel as well as plastic resins.

Exorbitant motor vehicle prices have accounted for much of the surge in inflation as a global semiconductor shortage linked to the nearly two-year long COVID-19 pandemic has forced manufactures to cut production, leaving virtually no inventory.

Services gained 0.2% last month after a similar rise in September. An 8.9% jump in margins for automobiles and parts retailing accounted for more than 80% of the increase in services. The cost of transportation and warehousing services jumped 1.7%, also reflecting snarled supply chains.

Data on Wednesday is expected to showed strong gains in consumer prices in October, according to a Reuters survey of economists. Stocks on Wall Street retreated from record highs. The dollar was steady against a basket of currencies. U.S. Treasury prices rose.

There is congestion at ports and widespread shortages of workers at docks and warehouses. There were 10.4 million job openings as of the end of August. The workforce is down 3 million from its pre-pandemic level.

Worker shortages were underscored by a report from the NFIB on Tuesday showing almost 50% of small businesses reported job openings they could not fill in October.

Also on Tuesday, Fed Chair Jerome Powell emphasized the U.S. central bank’s commitment to maximum employment, telling a virtual conference on diversity and inclusion in economics, finance and central banking that “an economy is healthier and stronger when as many people as possible are able to work.”

Wholesale prices of apparel, footwear and truck transportation of freight also rose last month as did the costs of food and alcohol retailing, hospital outpatient care as well as machinery, equipment parts and supplies.

Excluding the volatile food, energy and trade services components, producer prices shot up 0.4%. The so-called core PPI gained 0.1% in September. In the 12 months through October, the core PPI rose 6.2%. That followed a 5.9% advance in September.

Construction prices surged 6.6%, the largest gain since the series was incorporated into the PPI data in 2009.

“As companies feel the squeeze from higher energy and labor costs, as well as persistent logistics issues, producer price increases should be robust in the coming months,” said Will Compernolle, a senior economist at FHN Financial in New York.

“For now, we think the core PCE price index will be up 3.8% year-on-year in October,” said Daniel Silver, an economist at JPMorgan in New York.