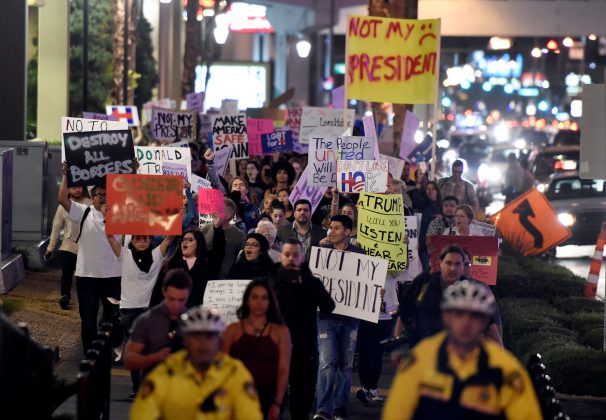 Demonstrators march along the Las Vegas Strip in protest against the election of Republican Donald Trump as President of the United States, in Las Vegas, Nevada, U.S. November 12, 2016. REUTERS/David Becker

NEW YORK (Reuters) – Demonstrators in major U.S. cities took to the streets on Sunday for a fifth straight day to protest President-elect Donald Trump, whose campaign manager said President Barack Obama and Democrat Hillary Clinton should do more to support a peaceful transition.

A few thousand joined a march at the south end of Manhattan’s Central Park, beginning at a Trump property on Columbus Circle and walking toward the real estate mogul’s skyscraper headquarters less than a mile (1.6 km) away.

They chanted: “Say it loud, say it clear, immigrants are welcomed here,” and held signs such as “White silence = violence” and “Don’t mourn, organize.”

One protester said demonstrators were reclaiming what the American flag he was holding stood for.

“The flag means freedom of speech, freedom of religion, equal protection under the law and other values like diversity, respecting differences, freedom of assembly and freedom of the press,” said Daniel Hayman, 31, of Seattle, who was in New York for work. “We’re trying to reclaim the flag and push forward those values.”

Thousands in several cities have demonstrated since the results from Tuesday’s election showed Trump, a Republican, lost the popular tally but secured enough votes in the 538-member Electoral College to win the presidency, surprising the world.

Largely peaceful demonstrators in urban areas have said Trump threatens their civil and human rights. They have decried Trump’s often inflammatory campaign rhetoric about illegal immigrants, Muslims and women, as well as allegations, which he denies, that the former reality TV star sexually abused women.

Dozens have been arrested, including 71 in Portland, Oregon, on Saturday night, according to police, and a handful of police injured.

In San Francisco on Sunday, about 1,000 people marched through Golden Gate Park toward a beach where they chanted: “Let’s make waves.” They held signs such as “I resist racism” and “Down with the Trumps.”

Across the bay in Oakland, thousands of protesters joined a festival-like atmosphere, holding peace signs and blowing soap bubbles in the sunshine. Many had brought their children, aiming to hold hands around the 3.4-mile (5.5-km) circumference of Lake Merritt in a popular urban park.

Civil rights groups have monitored violence against U.S. minorities since Trump’s win, citing reports of attacks on women in Islamic head scarves, of racist graffiti and of bullying of immigrant children. They have called on Trump to denounce the attacks.

Trump said he was ‘so saddened’ to hear of instances of violence by some of his supporters against minorities, according to a transcript released on Sunday of an interview with the CBS program ’60 Minutes.’

‘THIS MAN IS OUR PRESIDENT’

Kellyanne Conway, Trump’s campaign manager, said on Fox News on Sunday that she was sure many of the protesters were paid professionals, although she offered no proof.

Suggesting a double standard, Conway said on NBC’s “Meet the Press” that if Clinton had won the election and Trump supporters had protested, “people would be freaking out that his supporters were not accepting election results.”

“It’s time really for President Obama and Secretary Clinton to say to these protesters: ‘This man is our president,'” she said.

Republican House of Representatives Speaker Paul Ryan told CNN on Sunday that protests were protected by the First Amendment as long as they were peaceful.

Neither Obama nor Clinton has called for an end to the protests. Obama told Trump at the White House on Thursday that he was going to help Trump succeed, “because if you succeed, then the country succeeds.”

Clinton told supporters at a New York hotel on Wednesday: “Donald Trump is going to be our president. We owe him an open mind and the chance to lead.”

Trump on Sunday attacked the New York Times for coverage he said was “very poor and highly inaccurate.”

“The @nytimes sent a letter to their subscribers apologizing for their BAD coverage of me. I wonder if it will change – doubt it?” Trump wrote on Twitter.

The newspaper published a letter in Sunday’s editions from publisher Arthur Sulzberger and executive editor Dean Baquet, not apologizing, but thanking readers for their loyalty and asking how news outlets underestimated Trump’s support.

The Times plans to “hold power to account, impartially and unflinchingly” during the Trump presidency, they wrote.