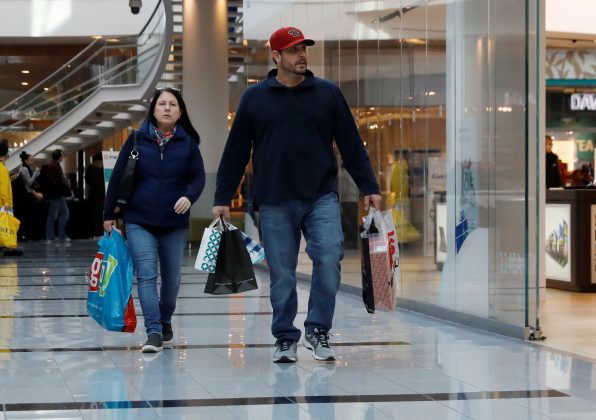 WASHINGTON (Reuters) – U.S. retail sales increased by the most in 1-1/2 years in March as households boosted purchases of motor vehicles and a range of other goods, the latest indication that economic growth picked up in the first quarter after a false start.

The economy’s enduring strength was underscored by other data on Thursday showing the number of Americans filing applications for unemployment benefits dropped to the lowest in nearly 50 years last week.

Fears of an abrupt slowdown in activity escalated at the turn of the year after a batch of weak economic reports. But those concerns have dissipated in recent weeks amid fairly upbeat data on trade, inventories and construction spending that have suggested growth last quarter could actually be better than the moderate pace logged in the final three months of 2018.

A report from the Federal Reserve on Wednesday described economic activity as expanding at a “slight-to-moderate” pace in March and early April. The Fed’s “Beige Book” report of anecdotal information on business activity collected from contacts nationwide showed a “few” of the U.S. central bank’s districts reported “some strengthening.”

The Commerce Department said retail sales surged 1.6 percent last month. That was the biggest increase since September 2017 and followed an unrevised 0.2 percent drop in February.

Economists polled by Reuters had forecast retail sales would accelerate 0.9 percent in March. Retail sales in March advanced 3.6 percent from a year ago.

With March’s rebound, retail sales have now erased December’s plunge, which had put consumer spending and the overall economy on a sharply lower growth trajectory. Retail sales last month were probably lifted by tax refunds, even though they have been smaller than in previous years, following the revamping of the U.S. tax code in January 2018.

They were previously reported to have decreased 0.2 percent in February. Consumer spending accounts for more than two-thirds of economic activity and is being buoyed by a tightening labor market that is driving up wage growth.

A separate report from the Labor Department on Thursday showed initial claims for state unemployment benefits dropped 5,000 to a seasonally adjusted 192,000 for the week ended April 13, the lowest level since September 1969. Claims have now declined for five straight weeks. Economists had forecast claims would rise to 205,000 in the latest week.

Though the trend in hiring has slowed, job gains remain above the roughly 100,000 needed per month to keep up with growth in the working-age population. The unemployment rate is at 3.8 percent, near the 3.7 percent Fed officials project it will be by the end of the year.

The dollar was trading higher against a basket of currencies while stocks on Wall Street were mixed. Prices of U.S. Treasuries were up.

March’s strong core retail sales could result in the further upgrading of first-quarter GDP estimates. Growth forecasts for the first quarter were boosted to around a 2.5 percent annualized rate on Wednesday after data showed the U.S. trade deficit narrowed for a second straight month in February.

First-quarter growth forecasts have been raised from as low as a 0.5 percent rate following relatively strong reports on trade, inventories and construction spending. The economy grew at a 2.2 percent pace in the fourth quarter.

Another report from the Commerce Department on Thursday showed business inventories rose in February and stock accumulation in the prior month was a bit stronger than initially estimated, a potential boost to growth.

Stronger growth in the first quarter will probably not change the view that the economy will slow this year as the stimulus from a $1.5 trillion tax cut package diminishes and the impact of interest rate hikes over the last few years lingers.

It also is unlikely to have any impact on monetary policy after the Fed recently suspended its three-year campaign to tighten monetary policy. The central bank dropped projections for any rate hikes this year after increasing borrowing costs four times in 2018.

Receipts at clothing stores shot up 2.0 percent, the largest increase since last May. There were also increases in sales at furniture outlets, electronics and appliances shops, and food and beverage stores. Sales at building materials and garden equipment and supplies also rose last month.