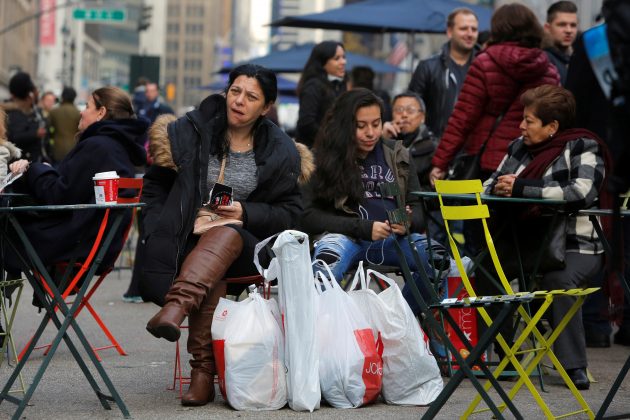 WASHINGTON (Reuters) – U.S. retail sales barely rose in November as households cut back on purchases of motor vehicles, suggesting some loss of momentum in economic growth in the fourth quarter.

Other data on Wednesday pointed to steadily rising inflation pressures, with producer prices notching their largest increase in five months in November. The moderation in retail sales came after two straight months of strong gains. With incomes rising and household wealth at record highs, the cool-off in retail sales is likely to be temporary.

Against the backdrop of a tightening labor market and perking inflation, the Federal Reserve is expected to raise interest rates later on Wednesday. The U.S. central bank hiked its overnight benchmark interest rate last December for the first time in nearly a decade.

In a separate report, the Labor Department said its producer price index for final demand increased 0.4 percent last month, the largest gain since June, after being unchanged in October.

A 0.5 percent increase in the cost of services accounted for more than 80 percent of the rise in the final demand PPI last month. The increase, which followed a 0.3 percent decline in October, was the largest since January.

The dollar fell to a session low against the yen on the retail sales data, while prices for longer-dated U.S. government bonds rose. U.S. stock index futures fell slightly.

The Atlanta Fed is forecasting GDP rising at a 2.6 percent annualized rate in the fourth quarter. The economy grew at a 3.2 percent pace in the third quarter.

Receipts at clothing stores were flat, suggesting a weak start to the holiday shopping season. Department stores like Macy’s &lt;M.N&gt; and Kohl’s &lt;KSS.N&gt; are facing intense competition from online retailers such as Amazon &lt;AMZN.O&gt;, which have snatched a large chunk of the market share.