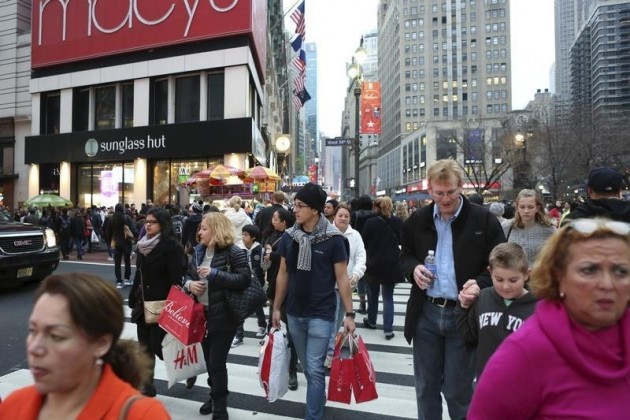 WASHINGTON (Reuters) – U.S. retail sales in April recorded their biggest increase in a year as Americans stepped up purchases of automobiles and a range of other goods, suggesting the economy was regaining momentum after growth almost stalled in the first quarter.

The jump in sales reported by the Commerce Department on Friday is a boost for the sector that has been hit by sluggish demand. It comes days after major retailers, including Macy’s and Nordstrom, reported sales tumbled in the first quarter and lowered their full-year profit forecasts.

“The retail sales report shows that recent claims of the demise of the U.S. consumer have been greatly exaggerated,” said Steve Murphy, a U.S. economist at Capital Economics in Toronto.

Signs of an acceleration in consumer spending keep an interest rate hike from the Federal Reserve next month on the table.

“Today’s data materially strengthen the hand of those within the Fed for a rate increase in June but we remain doubtful as to whether this view will prevail, barring an especially robust employment report in early June,” said Anthony Karydakis, chief economic strategist at Miller Tabak in New York.

Consumer spending prospects got a boost from a separate report showing sentiment among households jumped to an 11-month high in early May.

The University of Michigan said its consumer sentiment index surged 6.8 points to 95.8 early this month, the highest reading since June. Sentiment increased among all income and age groups, with big gains among lower-income and younger households.

Last month’s strong core retail sales increase could prompt economists to raise their second-quarter GDP, currently hovering around a 2 percent annualized rate. Economic growth braked to a 0.5 percent pace in the first three months of the year after expanding at a 1.4 percent pace in the fourth quarter.

But another report from the Commerce Department on Friday showing a 0.4 percent increase in business inventories in March suggest growth was much higher than initially estimated.

Data on retail sales, construction spending and factory orders have already implied that the advance GDP growth estimate could be raised to a 0.9 percent rate when the government publishes its revision later this month.

The dollar rose against the euro and the yen after the data, while prices for U.S. government debt fell. U.S. stocks were trading lower.

Retail sales have been sluggish in part because the strengthening labor market has not generated strong wage growth.

Economists also say that some of the savings from cheaper gasoline over the past year-and-a-half have been absorbed by rising rents and medical care costs.

The Commerce Department report showed retail sales in April rose across all categories, with the exception of building materials and garden equipment. Auto sales advanced 3.2 percent, the largest increase since March 2015, after slumping 3.2 percent in March.

Inflation continues to be restrained by the lingering effects of the dollar’s surge and oil price plunge. The greenback gained 20 percent against the currencies of the United States’ trading partners between June 2014 and December 2015.