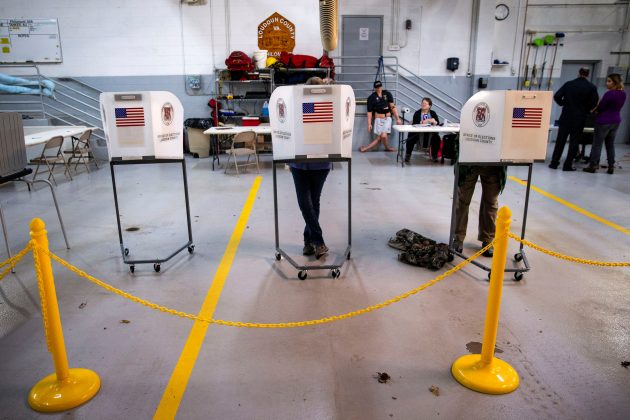 People fill out their ballots during the midterm election at Philomont Fire Station, in Purcellville, Virginia, U.S., November 6, 2018. REUTERS/Al Drago

WASHINGTON (Reuters) – Top U.S. officials said on Tuesday that foreign actors did not have a significant impact on computer systems and other equipment underpinning the November, 2018 congressional elections, despite reports of hacking attempts.

The two agencies said the U.S. government has found no evidence that foreign governments or agents had an impact last November, when Democrats won control of the House of Representatives.

Neither political campaigns nor electronic voting machines or other infrastructure was significantly affected, they said in a joint statement. They declined to provide further details.

U.S. prosecutors are investigating whether President Donald Trump’s campaign worked with the Kremlin to win the 2016 election. Trump has denied any collusion, and Moscow has also denied involvement.

Security experts have warned for years that U.S. election infrastructure — voting machines, voter registries and other computer systems — could be manipulated to change vote tallies or prevent people from casting ballots.

The 2016 election also illustrated how hackers can compromise candidates by releasing internal emails and other sensitive documents, and by working to sway public opinion through social media.

Ahead of the November 2018 election, U.S. intelligence and law enforcement officials warned that foreign actors were continuing their manipulation efforts. Prosecutors charged a Russian national with participating in a Kremlin-backed plan to interfere in the election.

Some state and local governments reported attempts to access their networks ahead of the November 2018 election, but U.S. officials said they were able to prevent or limit access.

On the night of the Nov. 6 election, Homeland Security Secretary Kirstjen Nielsen said there were no signs that voting systems had been breached.

The National Republican Congressional Committee, which works to elect Republican candidates, said it was the target of a hacking attempt last year. Democratic Senator Joe Manchin, running for re-election in West Virginia, also said his social-media accounts had been hacked.