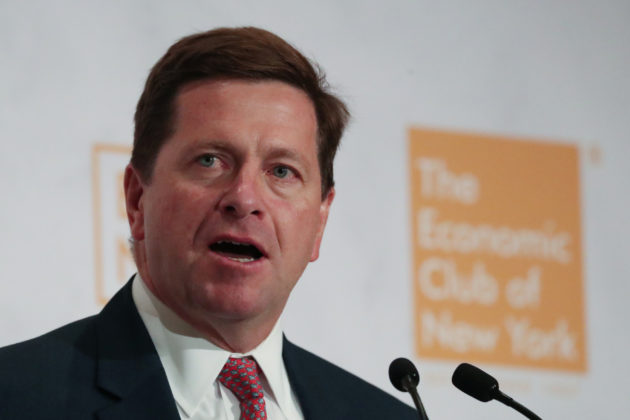 WASHINGTON (Reuters) – U.S. Securities and Exchange Commission Chairman Jay Clayton will step down from his position at the end of the year, the Wall Street regulator said in a statement on Monday.

Clayton’s early exit – his term would not expire until the end of June – clears the way for President-Elect Joe Biden to quickly take control of the regulatory agency when he is sworn in on Jan. 20, as Democrats are eager to create a more aggressive watchdog.

“Working alongside the incredibly talented and driven women and men of the SEC has been the highlight of my career,” said Clayton, who was appointed under President Donald Trump.

Clayton has said he wants to return home to New York and was expected to resign before his term ends in June. His departure would likely position an ultra-conservative ranking Republican commissioner, Hester Pierce, who frequently votes against penalizing companies for wrongdoing, to serve as an interim acting chairwoman at least until Biden takes office, lawyers said.

It is expected that senior Democratic SEC commissioner Allison Lee would be named as the acting chairwoman by Biden, until a permanent SEC chief is nominated and confirmed.

Under Clayton, the SEC has pursued changes to regulations that critics saw as burdensome or hindering corporate growth, often in the face of opposition from Democrats and investor advocates. The former corporate deals lawyer is generally respected for his expertise and described by those who deal with him as thoughtful and affable.

In July 2020, Clayton had been nominated by the Trump Administration to potentially replace a top federal prosecutor who was being fired by President Donald Trump at the time.

It is now unlikely Clayton would assume that role after Trump departs the White House, lawyers said.

Former derivatives market regulator Gary Gensler, who is working on a transition plan for financial industry oversight under Biden, is also a contender, sources told Reuters.