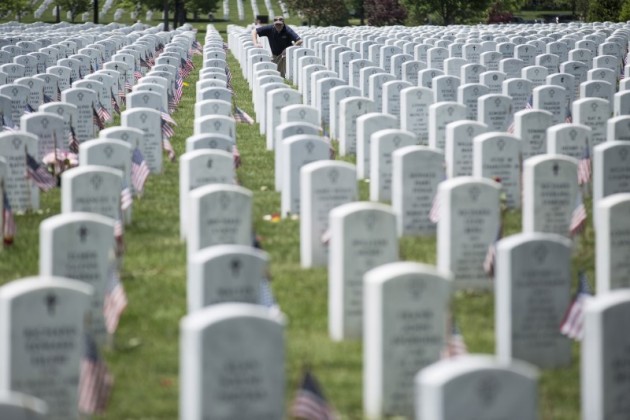 A man pauses at a grave during Memorial Day celebrations at Arlington National Cemetery in Arlington, Virginia May 25, 2015. REUTERS/Joshua Roberts

The unanimous voice vote moved the legislation a step closer to becoming law. It would allow the cremated remains of about 1,000 women who served as Women Airforce Service Pilots, or WASPs, in the 1940s to be buried there.

The women performed training and transport missions in the United States during the conflict so male pilots could be sent overseas.

Unlike male veterans, however, they cannot be interred at Arlington, the best-known but very crowded U.S. military cemetery, because authorities have insisted their service was not the same as active duty.

The measure must now be sent to the House of Representatives for its approval before it can be sent to the White House for President Barack Obama to sign into law.

It is expected to pass the House easily and it contains only technical differences from legislation the House passed by a vote of 385-0 in March.

The bill was sponsored by Republican Representative Martha McSally, who was the first woman U.S. Air Force pilot to fly combat missions.