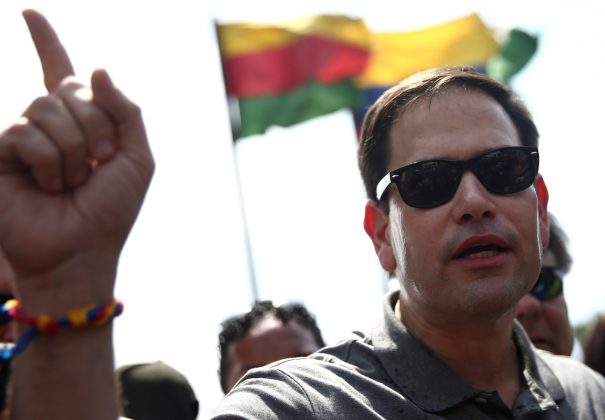 In a televised interview, Rubio declined to say if he would support U.S. military action against Venezuela, which is mired in a political and economic crisis.

But the Republican senator said he was confident that U.S. President Donald Trump’s administration would not stand by if the Venezuelan government harmed or imprisoned opposition leader Juan Guaido, who declared himself interim president last month.

“There are certain lines and Maduro knows what they are,” Rubio, a senator from Florida seen as an influential voice on Venezuela policy in Washington, told CNN. “The consequences will be severe and they will be swift.”

Rubio also warned Maduro against harming U.S. personnel working in the country and said the United States would also respond if aide workers were targeted.

The senator was part of a U.S. delegation visiting the Colombian border city of Cucuta, where humanitarian aid is being stockpiled for planned delivery to Venezuela.

While Maduro is refusing to allow in the food, medicine and other supplies, Guaido has vowed to move hundreds of tonnes of the aid into the country on Saturday.

Guaido has said he will announce details on Monday of how he plans to get the aid into the country from Colombia, Brazil and Curacao, despite Maduro’s opposition.

The Feb. 23 deadline sets the stage for a showdown with Maduro, who calls the aid a U.S.-orchestrated show and denies any crisis despite many Venezuelans’ scant access to food and medicine. It is unclear whether the military will allow aid to cross the border.

Most Western countries and many of Venezuela’s neighbors have recognized Guaido as the legitimate head of state after Maduro won a second term in an election last year that critics denounced as a sham. Maduro retains the backing of Russia and China and control of Venezuelan state institutions including the military.

The U.S. delegation included Carlos Trujillo, the U.S. ambassador to the Organization of American States, and Republican U.S. Representative Mario Diaz-Balart of Florida.

(Reporting by Steven Grattan in Cucuta; Additional reporting by Jason Lange in Washington; Editing by Jeffrey Benkoe and Peter Cooney)