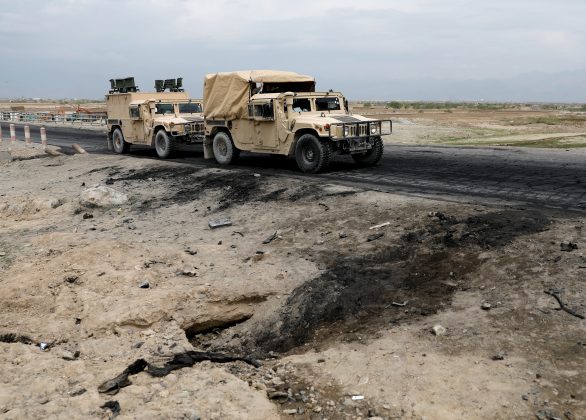 An Afghan military convoy drives past the site of a car bomb attack where U.S soldiers were killed near Bagram air base, Afghanistan April 9, 2019. REUTERS/Mohammad Ismail

WASHINGTON (Reuters) – An Afghan contractor who was believed to have been killed in a car bomb near Kabul is alive, the U.S. military said on Tuesday.

Colonel David Butler, a spokesman for U.S. Forces- Afghanistan, told Reuters the Afghan contractor was initially believed to have been killed along with three other U.S. service members in the blast near Bagram air base close to Kabul.

It was only later that they found out the contractor was alive.

Violence has been relentless in Afghanistan even though Taliban militants have held several rounds of talks with U.S. officials about a peace settlement. The talks began late last year, raising hopes for an end to the conflict.

Monday’s attack was one of the deadliest against U.S. personnel in recent months. In November, a roadside bomb blast killed three U.S. service members near the central Afghan city of Ghazni.

The war has taken a much larger toll on Afghan security forces and civilians.

President Ashraf Ghani, speaking at the World Economic Forum in January, said about 45,000 members of Afghanistan’s security forces have been killed since he took office in September 2014, which works out to an average of 849 per month.