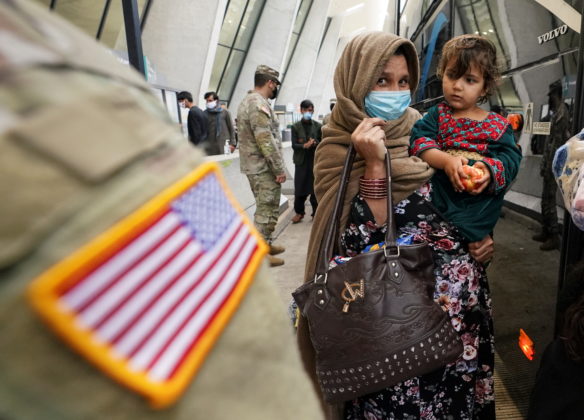 FILE PHOTO: A day after U.S. forces completed its troop withdrawal from Afghanistan, refugees board a bus taking them to a processing center upon their arrival at Dulles International Airport in Dulles, Virginia, U.S., September 1, 2021. REUTERS/Kevin Lamarque

(Reuters) -A U.S. State Department watchdog is launching a series of investigations into the chaotic end of the Biden administration’s diplomatic operations in Afghanistan, including the emergency evacuation of the U.S. embassy in Kabul, Politico reported on Monday.

Politico said its report was based on State Department and congressional officials and documents.

In addition to the embassy evacuation, the agency’s acting inspector general will also look into the State Department’s Special Immigrant Visa Program, the processing of Afghans for admission as refugees, and their resettlement in the United States, the news website said.

The acting inspector general, Diana Shaw, notified Congress of the move on Monday. In a letter to lawmakers, Shaw said her office was launching “several oversight projects” related to the end of the U.S. military and diplomatic missions in Afghanistan, Politico said.

The Office of Inspector General (OIG) for the State Department did not immediately respond to a request for comment.

Politico quoted an OIG spokesperson as saying the inquiries will be reviews and not investigations. The spokesperson confirmed the office had notified the relevant congressional committees of the reviews.

In mid-August, the U.S.-backed Afghan government collapsed as the Taliban swept through the country at lightning speed and marched into the capital, Kabul, unopposed. The United States was then left seeking the militant group’s cooperation in the chaotic U.S. evacuation from Kabul.

(Reporting by Kanishka Singh in Bengaluru; Editing by Chris Reese and Jonathan Oatis)