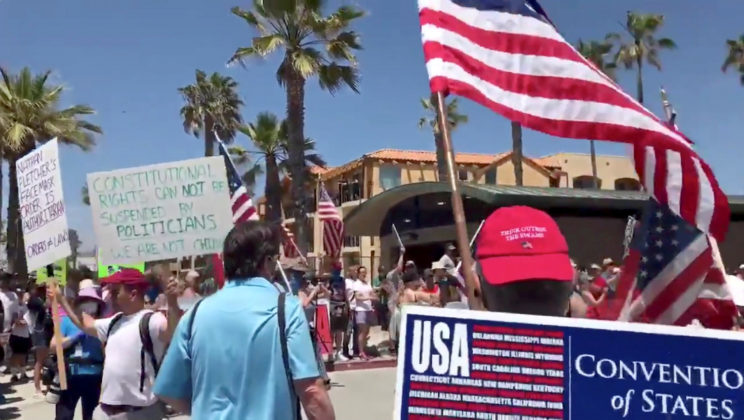 People rally for the U.S. and call for the end of the lockdown in San Diego, California, amid the coronavirus disease (COVID-19) outbreak in the U.S., April 26, 2020, in this still image from video obtained via social media. Kelly Neill via REUTERS

WASHINGTON (Reuters) – U.S. states from Minnesota to Mississippi this week prepared to join other states that have eased coronavirus restrictions to try to revive their battered economies, although some business owners voiced reluctance in the face of health warnings.

Colorado, Montana and Tennessee were also set to allow some businesses deemed nonessential to reopen after being shut for weeks even as health experts advocated for more diagnostic testing to ensure safety.

Georgia, Oklahoma, Alaska and South Carolina previously restarted their economies following weeks of mandatory lockdowns that have thrown millions of American workers out of their jobs.

The number of known U.S. infections kept climbing on Monday, topping 970,000 as the number of lives lost to COVID-19, the highly contagious respiratory illness caused by the virus, surpassed 54,800.

Public health authorities warn that increasing human interactions and economic activity may spark a new surge of infections just as social-distancing measures appear to be bringing coronavirus outbreaks under control.

New Jersey Governor Phil Murphy said in a Twitter message late on Sunday that he would announce a roadmap for “responsibly reopening” the state at a Noon ET (1600 GMT) news conference on Monday.

Although unprecedented stay-at-home orders have put many businesses in jeopardy, many owners have expressed ambivalence about returning to work without more safeguards.

‘I WOULD STAY HOME’

“I would stay home if the government encouraged that, but they’re not. They’re saying, ‘Hey, the best thing to do is go back to work, even though it might be risky,’” Royal Rose, 39, owner of a tattoo studio in Greeley, Colorado, told Reuters.

The state’s Democratic governor, Jared Polis, has given the green light for retail curbside pickup to begin on Monday. Hair salons, barber shops and tattoo parlors may open on Friday, with retail stores, restaurants and movie theaters to follow.

Business shutdowns have led to a record 26.5 million Americans filing for unemployment benefits since mid-March and the White House has forecast a staggering jump in the nation’s monthly jobless rate.

President Donald Trump’s economic adviser Kevin Hassett told reporters on Sunday the jobless rate would likely hit 16% or more in April, and that “the next couple of months are going to look terrible.”

On Monday, White House adviser Peter Navarro said the Trump administration is focusing on protocols to keep U.S. factories open as the country grapples with the coronavirus outbreak, including screening workers for potential cases.

Trump was scheduled to hold a video call with the country’s governors on Monday afternoon before the White House coronavirus task force’s daily briefing.

The rise in the number of U.S. cases has been attributed in part to increased diagnostic screening. But health authorities also warn that testing and contact tracing must be vastly expanded before shuttered businesses can safely reopen widely.