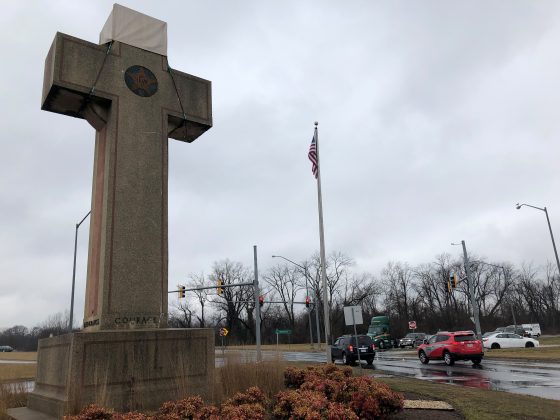 A concrete cross commemorating servicemen killed in World War One, that is the subject of a religious rights case now before the U.S. Supreme Court, is seen in Bladensburg, Maryland, U.S., February 11, 2019. Picture taken on February 11, 2019. REUTERS/Lawrence Hurley

WASHINGTON (Reuters) – A 40-foot-tall (12 meters) cross-shaped war memorial standing on public land in Maryland does not represent an impermissible government endorsement of religion, the Supreme Court ruled on Thursday in a major decision testing the boundaries of the U.S. Constitution’s separation of church and state.

The justices, in a 7-2 decision, overturned a lower court ruling that had declared the so-called Peace Cross in Bladensburg unconstitutional in a legal challenge mounted by the American Humanist Association, a group that advocates for secular governance. The concrete cross was erected in 1925 as a memorial to troops killed in World War One.

The challengers had argued that the cross violated the Constitution’s so-called Establishment Clause, which prohibits the government from establishing an official religion and bars governmental actions favoring one religion over another.

The American Humanist Association did not immediately comment on the ruling.

The fractured decision saw two of the court’s liberals, Justice Stephen Breyer and Justice Elena Kagan, joining the five conservatives in parts of the majority. The ruling made it clear that such a monument in the shape of a Christian cross on public land was permissible but the justices seemed divided over whether other types of religious displays and symbols on government property would be allowed.

Justice Samuel Alito, a conservative, wrote for the majority that although the cross is a religious symbol, “its use in the Bladensburg memorial has special significance” because it functions as a war memorial.

“For nearly a century, the Bladensburg cross has expressed the community’s grief at the loss of the young men who perished, its thanks for their sacrifices, and its dedication to the ideals for which they fought,” he added.

To tear the cross down now could be seen as an act of hostility against religion, Alito said.

Where the justices differ is on what kinds of other displays, including ones built more recently, would violate the Constitution.

“A newer memorial, erected under different circumstances, would not necessarily be permissible under this approach,” Breyer wrote in a concurring opinion.

The Peace Cross was funded privately and built to honor 49 men from Maryland’s Prince George’s County killed in World War One. The property was in private hands when the cross was erected, but is now on land owned by the Maryland-National Capital Park and Planning Commission, a governmental agency.

The cross had the backing of Republican President Donald Trump’s administration. The American Legion holds memorial events at the site. Veterans and their relatives have said the monument has no religious meaning despite being in the shape of a cross, calling the lawsuit misguided and hurtful.

(Reporting by Lawrence Hurley; editing by Will Dunham and Grant McCool)