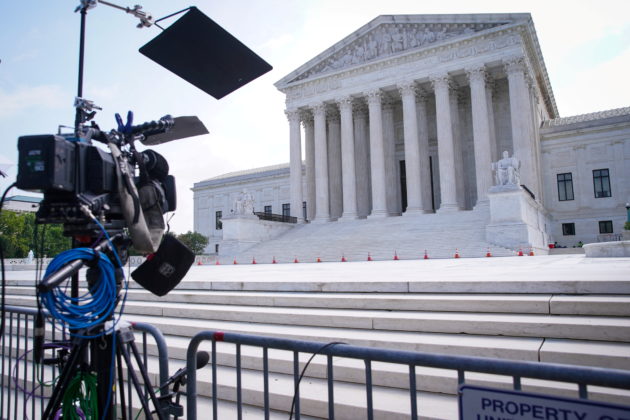 (Reuters) – In another case stemming from a restrictive abortion law, U.S. Supreme Court justices on Tuesday signaled a willingness to let Kentucky’s Republican attorney general defend his state’s statute – struck down by lower courts – after its Democratic governor dropped the case.

The arguments heard by the nine justices did not involve the legality of the 2018 law, focusing instead on the narrow legal issue of whether Kentucky Attorney General Daniel Cameron can take over the defense of it in a bid to revive the measure.

The dispute highlighted the sometimes messy conflicts that arise when a governor and a state’s top legal officer differ in political views or party, leading to disagreements on whether to defend certain state laws in court.

Both liberal and conservative justices asked questions during the argument that indicated sympathy toward ensuring that Cameron, as attorney general, retains the power to act even after the political party of the governor changes hands.

Republican-backed abortion restrictions enacted by numerous U.S. states in recent years have continued to draw the attention of the nation’s highest judicial body.

Abortion rights advocates have said that Kentucky’s law would effectively ban an abortion method called dilation and evacuation – the most common form performed during the second trimester of a pregnancy – effectively banning abortions after 15 weeks of pregnancy.

The justices must decide whether Cameron can now try to defend the law after lower courts already ruled that it violated Supreme Court precedents holding that women have a right under the U.S. Constitution to obtain an abortion. Governor Andy Beshear’s administration dropped the case.

Abortion opponents are hopeful that the court, which has a 6-3 conservative majority, will pare back abortion rights this term. The justices will hear arguments in December over a Mississippi law that bans abortion after 15 weeks of pregnancy, a case in which that state is asking the court to overturn the 1973 Roe v. Wade ruling that legalized the procedure nationwide.

EMW Women’s Surgical Center, an abortion clinic in Louisville, challenged Kentucky’s law, which was signed by then-Governor Matt Bevin, a Republican. Bevin subsequently lost his re-election bid to Beshear in 2019.

Liberal Justice Stephen Breyer noted during the argument that Republicans and Democrats often hold different views on abortion, and that after the new Democratic administration dropped the case Cameron stepped in.

“At that point for the first time we have an attorney general who thinks it’s a pretty good statute – he wants to defend it,” Breyer said “… So if there’s no prejudice to anybody – and I can’t see where there is – why can’t he just come in and defend the law?” Breyer asked a lawyer from the American Civil Liberties Union representing the abortion clinic.

The Beshear administration’s health department continued to defend the law in court after he took office. But after the Cincinnati-based 6th U.S. Circuit Court of Appeals struck it down in 2020, his administration decided not to press the matter further.

Cameron then sought to take over the defense. The 6th Circuit denied that request, saying it was too late for Cameron’s office to step in.

The Kentucky law is one of a growing number passed by Republican legislators at the state level imposing a variety of restrictions on abortion. The justices last month allowed a near-total ban on abortion in Texas to go into effect.