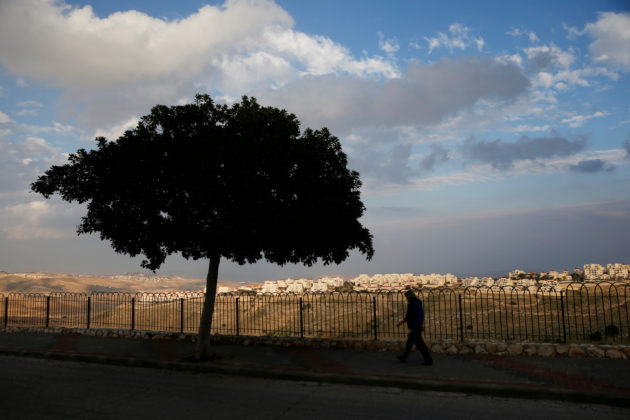 FILE PHOTO: A woman walks on a pavement in the Israeli settlement of Maale Adumim in the Israeli-occupied West Bank January 28, 2020. REUTERS/Ronen Zvulun/File Photo

JERUSALEM (Reuters) – A U.S. envoy warned Israel on Sunday not to declare sovereignty over West Bank land without Washington’s consent, pushing back against calls for immediate action by ultra-nationalists within Prime Minister Benjamin Netanyahu’s coalition.

U.S. President Donald Trump’s Middle East peace plan, unveiled on Jan 28, envisages Israel keeping key swathes of the occupied territory where Palestinians seek statehood. But the question of timing has opened up a rare rift between the allies.

Netanyahu initially pledged a speedy “application of Israeli law” – de facto annexation – to Jewish settlement blocs and the Jordan Valley, delighting his religious-rightist base ahead of Israel’s March 2 election, where he hopes to win a fifth term.

But he was forced to backpedal after the White House made clear it wanted a U.S.-Israeli mapping process – likely to take weeks or more – completed first. 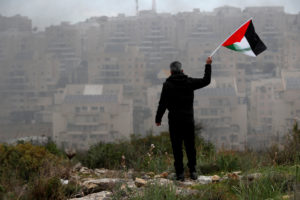 A demonstrator holds a Palestinian flag as the Jewish settlement of Modiin Illit is seen in the background, during a protest against the U.S. President Donald Trump’s Middle East peace plan, in the village of Bilin in the Israeli-occupied West Bank February 7, 2020. Picture taken February 7, 2020. REUTERS/Mohamad Torokman

The Palestinians, for their part, have rejected the Trump plan as a non-starter.

With Defence Minister Naftali Bennett and other Israeli ultra-nationalists urging an immediate cabinet vote on sovereignty in the West Bank, the U.S. ambassador intervened.

“Israel is subject to the completion (of) a mapping process by a joint Israeli-American committee. Any unilateral action in advance of the completion of the committee process endangers the Plan & American recognition,” envoy David Friedman tweeted.

In a separate speech, Friedman elaborated that his message was “a little bit of patience, to go through a process, to do it right, is not something which we think is too much to ask for”.

“With the news out that the (Israeli) cabinet was about to be pushed in a direction that was potentially adverse to our view of the process, we just let people know where we stand,” he told the Jerusalem Center for Public Affairs (JCPA) think-tank.

“The (U.S.) recognition is the main thing and we don’t want to endanger that,” the premier told his cabinet on Sunday.

At the JCPA, Friedman said the mapping process was unlikely to be completed before March 2. But he held out the possibility of implementation even if the election does not produce a clear winner, as was the case twice in the last year.

Asked if Washington first wanted a permanent Israeli government – as opposed to a caretaker government of the kind Netanyahu has headed by default for months – in place, Friedman said: “We have not made that demand.”

Most countries consider Israeli settlements on land captured in the 1967 Middle East war to be a violation of international law. Trump has changed U.S. policy to withdraw such objections and the prospect of Israeli annexations have drawn widespread condemnation.

Palestinians say the settlements make a future state unviable. Israel cites security needs as well as biblical and historical ties to the land on which they are built.

“Any unilateral step is rejected whether it is taken before or after the election,” said Nabil Abu Rdainah, a spokesman for Palestinian President Mahmoud Abbas. “Facts can’t be created on the ground and they will never become a reality.”

“The only thing we can accept is the Palestinian map on the 1967 borders,” Abu Rdainah added.

On Saturday, Netanyahu told an election rally that the mapping process with the Americans was already under way. “We’ve been waiting since 1967 and some people are making a big deal out of a few weeks,” he said, alluding to rightist rivals.